To teach sixth-graders about biotic and abiotic factors in the microclimate of an ecosystem, Dietrich Nebert, a science teacher at Riverdale Grade School in Portland, Oregon, leads them to the school’s outdoor classroom and garden space. The students then collect soil, leaves, flower petals, sand, and other small samples pinched between strips of clear tape.

Once back in the classroom, students examine their samples under a microscope and write observations. Their assignment: to determine how their materials are associated with the living and non-living parts of the school’s backyard microclimate.

“I could have just brought in a pile of leaves or soil instead but setting up the experiment would have been much more canned,” says Nebert, who brings students outside for an hour every Wednesday. “The students wouldn’t have a sense of what it feels like to be in that ecosystem, and it’s so important to tie that in. It empowers them, gives them a chance to be a real scientist.”

School garden programs like this one at Riverdale Grade School are on the rise. More than one-quarter of public elementary schools nationally had garden programs linked to their curriculum in 2013 — a 133 percent increase since 2007, according to Bridging the Gap, a research program of the Robert Wood Johnson Foundation. Most are in the West and at urban elementary schools. 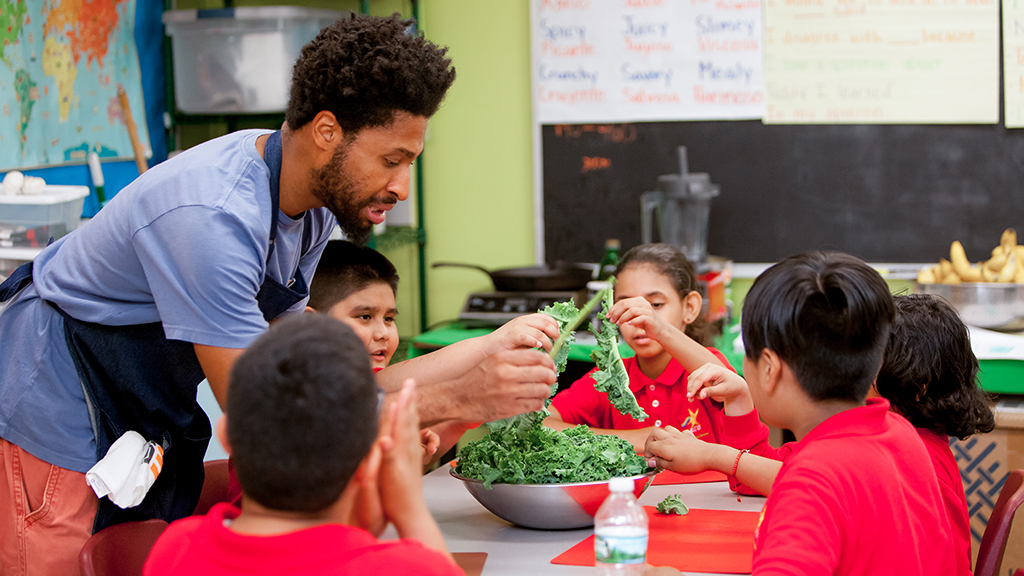 School gardens offer a hands-on, engaging way to learn. They benefit t students who might have trouble understanding abstract measurements in math class, for example, but can easily visualize what half a cup of kale — kale they helped grow—looks like.

Numerous studies have documented that school gardens have a positive effect on a host of measures, including interpersonal relationships, dietary behaviors, pedagogy, experiential education, and academic performance.

One study from 2005 found that students score significantly higher on science achievement tests when school garden programs are incorporated into their science curriculum. And benefits extend beyond the classroom. School gardens also help foster environmental stewardship and civic pride, and research has shown that children with garden experience tend to eat more fruits and vegetables when they’re older.

While interest in using school gardens to teach science, technology, engineering, math, and other academic subjects — as well as nutrition — is escalating, they’re not a new concept. The first one in this country was established in 1891 at the George Putnam School in Roxbury, Massachusetts. The movement peaked just after World War I before the urgency for surplus food production began to wane, according to the U.S. Department of Agriculture.

Edible Schoolyard NYC receives requests almost every week from schools wanting a partnership. The organization works directly with seven schools and supports dozens more indirectly and through professional development — but relies on fundraising and can only do so much.

“There’s way more interest than we can accommodate,” says Liza Engelberg, the organization’s director of education. “There’s a huge demand for this type of education.”

“This is one way to show students that what they learn in school can solve some real-world problems,” says math teacher Anh Nguyen. 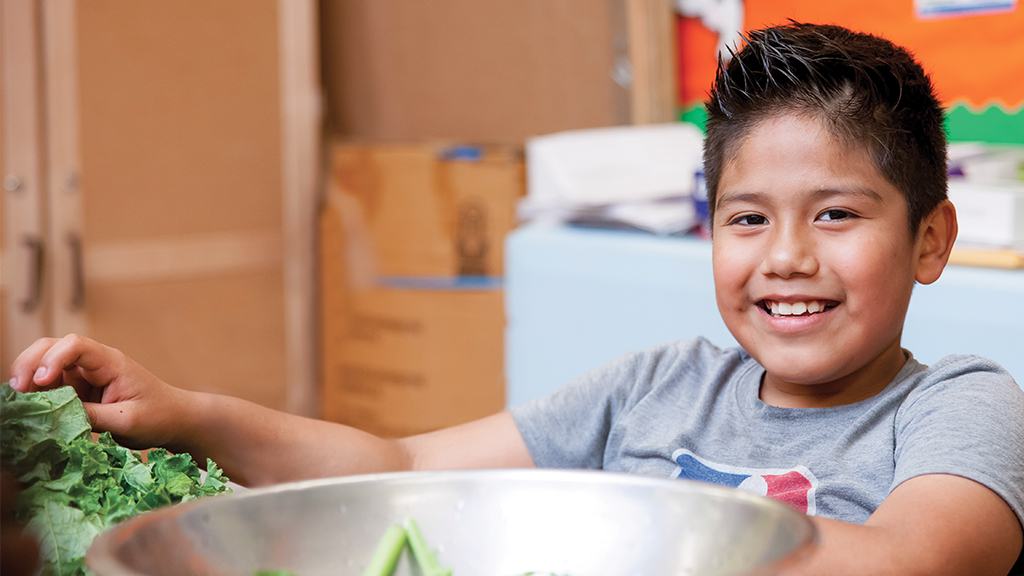 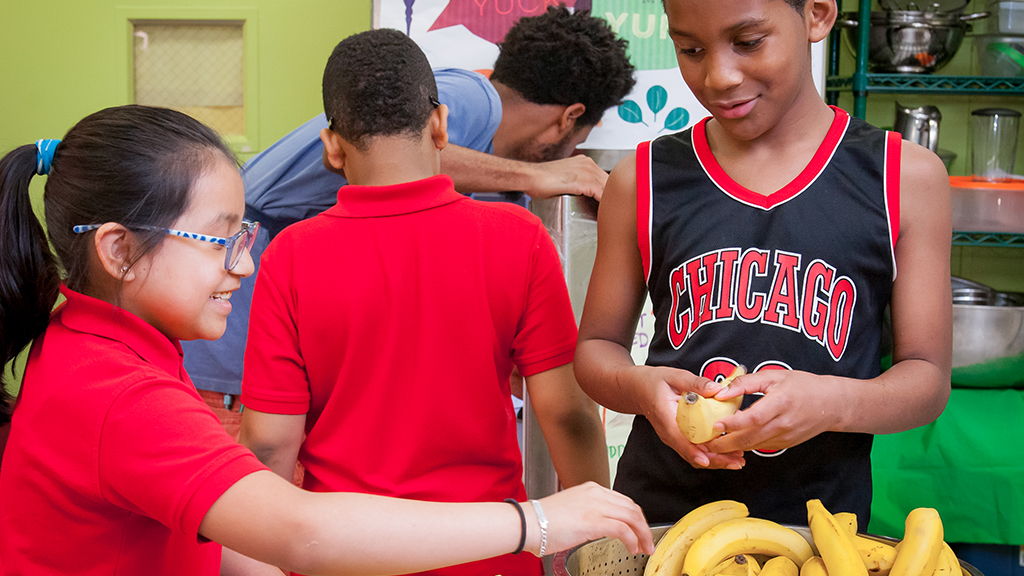 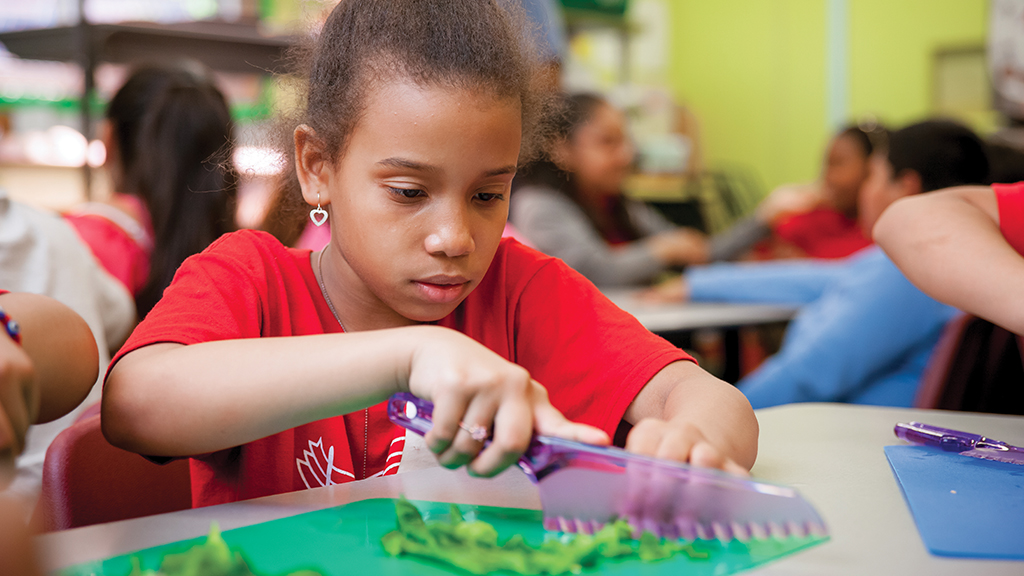 Wekiva’s aquaponic gardens are completely soil-free, fertilized with fish waste from 1,000 koi and tilapia that live on campus.

Educators increasingly are using both aquaponics and hydroponics to promote sustainability while teaching a variety of subjects. Hydroponics is a method of growing plants using a water-based, nutrient-rich solution instead of soil.

Emerson Middle School in Union City, New Jersey, created a hydroponic lab three years ago. It was the first one for Union City Public Schools. The district now is working to put one in each of its 15 schools.

“Starting from scratch, you literally can do it on the cheap, for a few hundred dollars,” says Charles Webster, director of grants and innovative programming at the Union City Board of Education.

Emerson’s initial lab had drip systems made from recycled 64-ounce soda bottles, and a store-bought pump. Over the three years, as the lab has expanded, the investment has reached about $35,000, from local funds and grants that also support the school’s outdoor garden. Mini-grants from big-box home improvement stores have purchased gloves, tools, seeds, and plants.

Those requests are vital for an urban district like Union City, in the country’s second most populous city, where student poverty rates in schools range from 32 percent to 94 percent.

Since the lab’s inception, Emerson has donated almost 15,000 pounds of food to the local food pantry and currently is expanding to aquaponics, so students can raise salmon. Senior citizens volunteer for two hours a day to mentor students in both gardens.

Time and money are very real concerns when it comes to keeping up with watering and weeding gardens.

“Sustainability is often an issue,” says Jessica Buchanan, outdoor education coordinator at Hollin Meadows Elementary School in Alexandria, Virginia. “We can raise funds and get kids out to help plant, but if we don’t have people out there to maintain the space, everything is going to die, and then what’s the point? Teachers are maxed out already. It’s hard enough for them to find time in the day to bring kids out for lessons with me.” 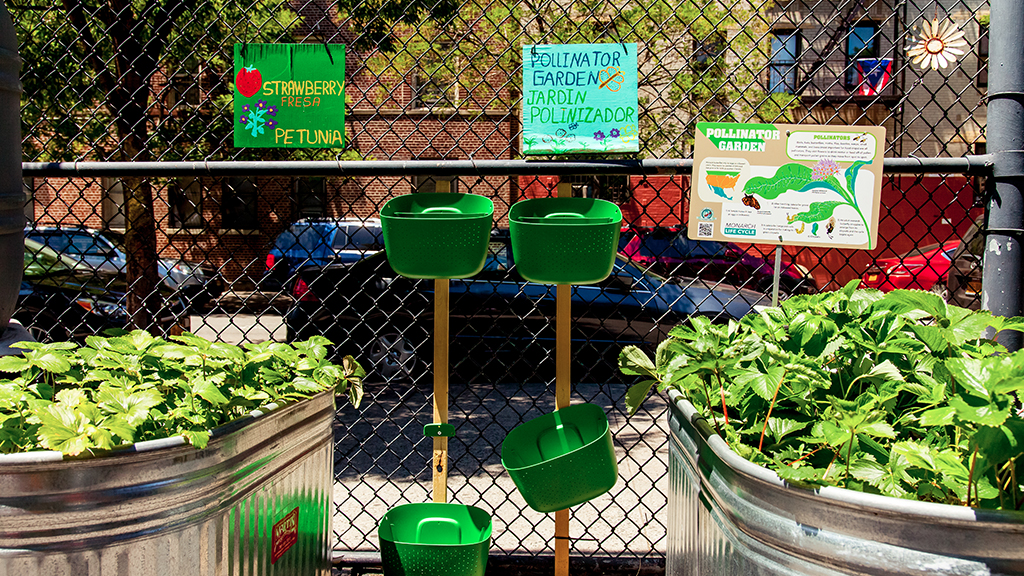 Buchanan, who has a degree in elementary education and is a gardener and herbalist, came to the school part-time in September. Hollin Meadows had a flourishing garden and outdoor education program until a few years ago, when the school underwent a massive reconstruction and the gardens had to be pulled out to make way for new wings. Now that there is ample space for outdoor learning classrooms, Buchanan is currently in “full-blown reestablishment mode.”

The school now has two gardens, one dedicated as an outdoor learning lab that produced 42 pounds of lettuce for its Thanksgiving luncheon. After reading Beatrix Potter’s book Peter Rabbit, kindergartners planted, watered, and harvested radishes, the vegetable that Peter Rabbit took from Mr. McGregor’s garden. And third-graders studying the life cycle of a ladybug got an up-close-and-personal lesson about larva, pupa, and adult stages after a huge infestation on the garden’s picnic tables.

“I have never seen kids get so excited,” recalls Buchanan, who folded into the lesson the fact that ladybugs eat sap-sucking aphids that eat and kill the lettuce. “It was a real-life example of what they were learning in class. It’s going to stick with them.”

In the spring, the school will be installing two rain gardens to teach about science, social studies, and art. And if collaborations on some grants work out, the school will start an urban farm on 1.3 acres toward the back of the campus to provide local organic produce for the cafeteria and neighboring schools.

“She’s a very critical piece,” says Stacy Bertuccelli, the school’s magnet coordinator. “Just like plants have cycles, school gardens have cycles. Students leave, so families leave, and the garden loses some of its impact. And then it’s brought back through our students and families and volunteers. You need a dedicated person like Garden Ranger Flo to guide everyone so teachers can make the best use of the gardens.”

Gardens are an integral part of the culture at Melrose. The school has a native garden with plants predominantly from California, a butterfly lifecycle garden, a seed-to-table garden — where most outdoor STEM lessons are taught — and vertical gardens on gates and fences around campus.

Using the seed-to-table garden, Razowsky gave fifth-graders popsicle sticks, straws, string, and cardboard food boats from the cafeteria. Their job was to make containers to grow food. They had to draw designs based on the materials available, then use measurements to figure out how to build those designs. Once the containers were built, students filled them with soil and grew plants from seed. Some plants grew well; others did not.

“Throughout the entire process, each step helped students recognize there are successes and challenges,” explains Razowsky. “It put all of the STEAM components together from start to finish.” 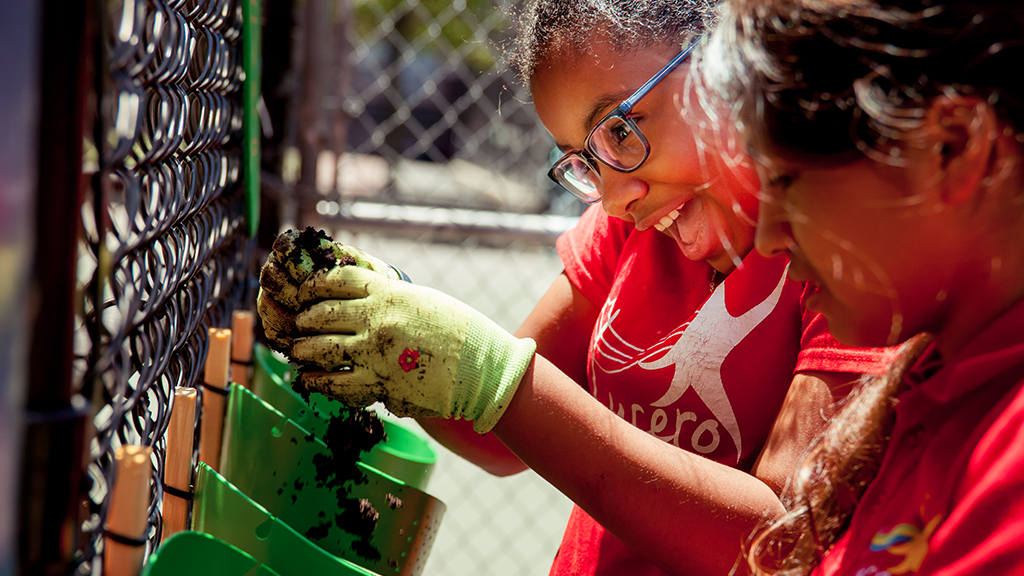 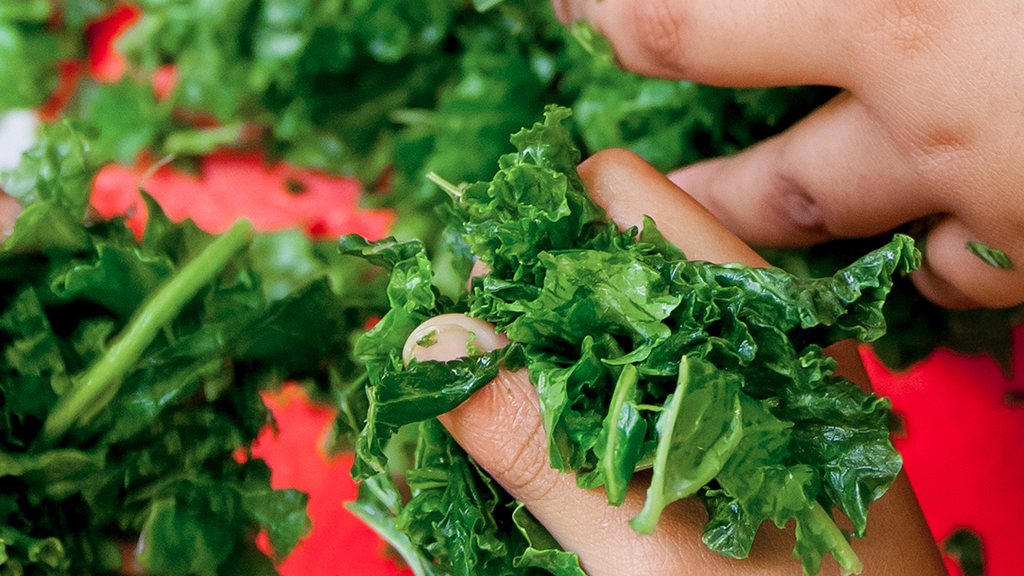 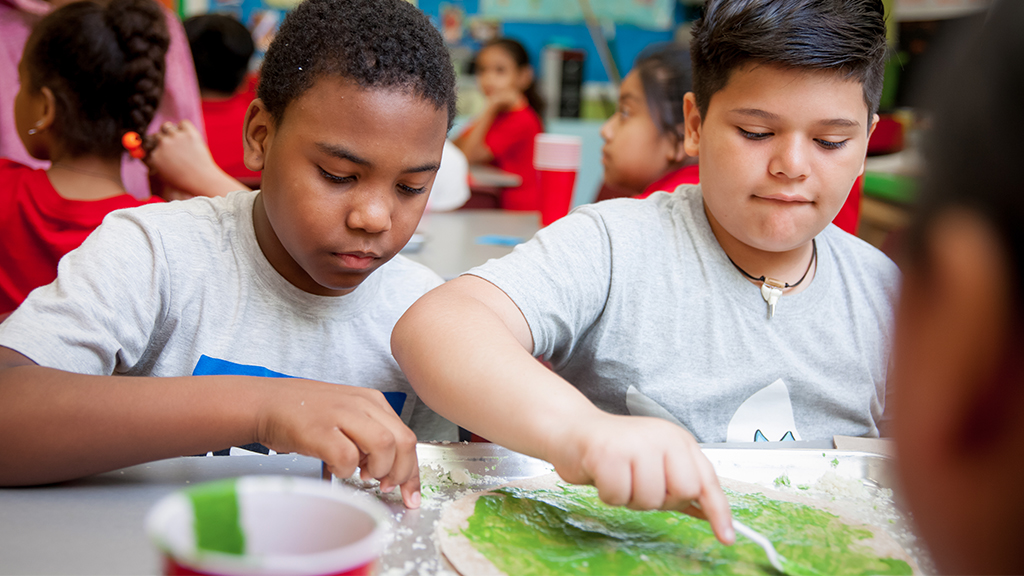 To help with maintenance, parents adopt areas of the garden to water, the school sponsors community beautification days, and twice a year, families care for the gardens to teach the value of community service.

Any school or district wanting to start a garden needs to think about how to care for it over the long run, according to Eva Barinas, school garden program manager for Grow Pittsburgh, a nonprofit organization offering support to some 30 schools in Allegheny County.
“For us, it’s very important there’s going to be longevity,” she says. “Our direct support only lasts about two years while we help schools figure out how to continue on and evolve.”

School gardens can be an inviting place to learn for students with special needs.

Buchanan, from Alexandria, recently observed one boy with major sensory processing issues transform from being terrified of touching a plant bulb to rooting through a box to pick one out and then digging a hole in the soil with his hands.

Educators say students who have trouble sitting still often thrive when they can use a hand trowel to plant vegetables and harvest herbs. Those uninterested in classroom math lessons seem to enjoy calculating yield when spreading seeds in a square foot garden.

All students seem to blossom from time spent in the garden, according to Dan Feder, program manager at the PS216 elementary school in New York City. “One of the benefits is that this isn’t a traditional classroom setting, so a lot of kids look at it almost as a field trip,” he says.

PS216 celebrates its diversity — more than 40 countries of origin are represented in its student population — when using its outdoor garden in lesson plans. Every month, for instance, students make a recipe in the school’s dedicated kitchen classroom. In October they made a chickpea rice dish from Pakistan called chana chawal, using coriander seeds and turmeric from the garden to help make a curry powder. The younger grades used a word bank to describe their sensory experiences with the spices; older grades learned about the spice trade. 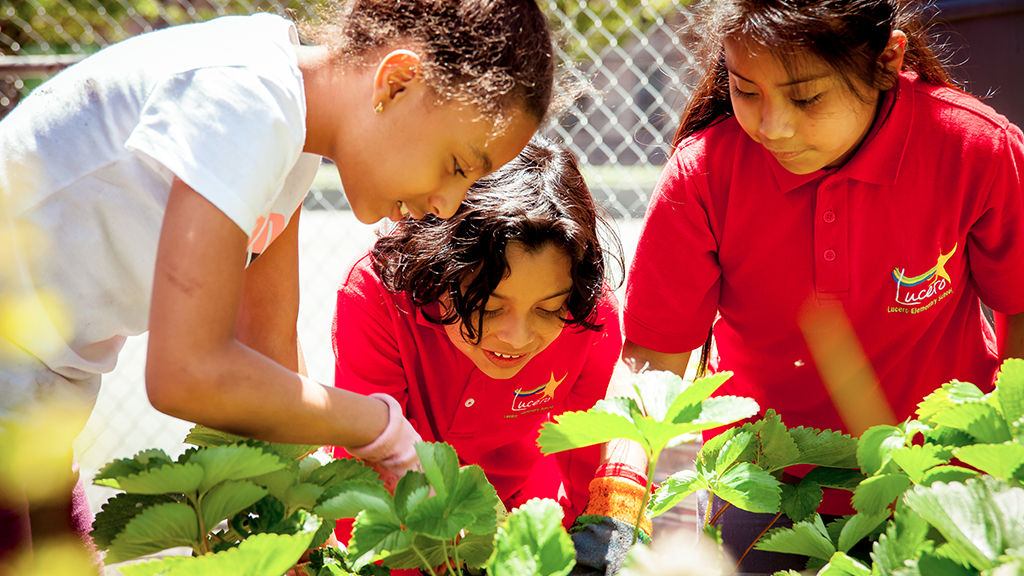 Webster, the administrator from Union City, emphasizes that school gardens are about so much more than academics, especially for the students in his district who grow up around a lot of concrete. It is not uncommon for middle-schoolers there, when preparing for a spring planting, to have their hands in the dirt for the very first time. The experience makes them much more attentive when learning about how to grow food, a particularly poignant topic for many of them who don’t know where their next meal is going to come from.

Robin L. Flanigan (robin@thekineticpen.com) is a freelance writer in Rochester,