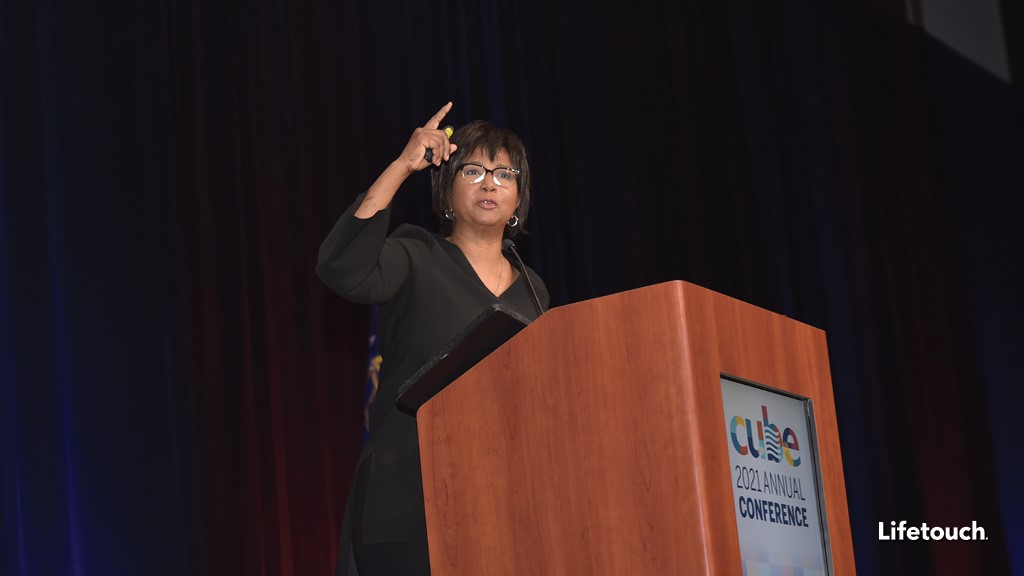 The first African American woman to travel into space spoke on Friday at the CUBE Annual Conference in Atlanta. Dr. Mae Jemison is a physician who spent more than a week in space in 1992 orbiting Earth in the space shuttle Endeavour.

An advocate for science education and getting students of color interested in science, Dr. Jemison loved both Barbies and Star Trek as a child. (She appeared on Star Trek: The Next Generation.) She attended Chicago Public Schools, where her mother was a teacher.

While in high school, she became interested in biomedical engineering, and after graduating at the age of 16, she entered Stanford University. There she received degrees in chemical engineering and African American studies.

After graduation, Dr. Jemison went to medical school at Cornell University. She then became a medical officer with the Peace Corps in West Africa. She worked with the National Institutes of Health and the Centers for Disease Control and prevention on several research projects, including development of a hepatitis B vaccine.

After returning to the U.S., Dr. Jemison applied to the National Aeronautics and Space Administration (NASA) to be an astronaut. She was 1 of 15 accepted out of 2,000 applicants. Jemison completed her training as a mission specialist with NASA in 1988.

Getting students of color interested in science is one of her passions. It’s one reason she established the Dorothy Jemison Foundation for Excellence, which develops and implements teaching methods, curricula, materials, and programs that foster educational experiences resulting in individuals fully able to participate and contribute effectively and beneficially to society. It is named for her mother.

The program featured a science camp where students ages 12-16 work in teams to solve global dilemmas: predict stocks in the year 2030, design the world’s perfect house, figure out of there is intelligent life beyond Earth. “Problems don’t come to you all nice and neat,” she said. “So we wanted to teach students how to think about a problem.”

Jemison quoted her mom as saying, "Helping each student to achieve their own level of excellence must be the objective of all educators. To merely offer the goal 'to be number one' is foolish; everyone cannot be number one, and it fails to demand the best of everyone."