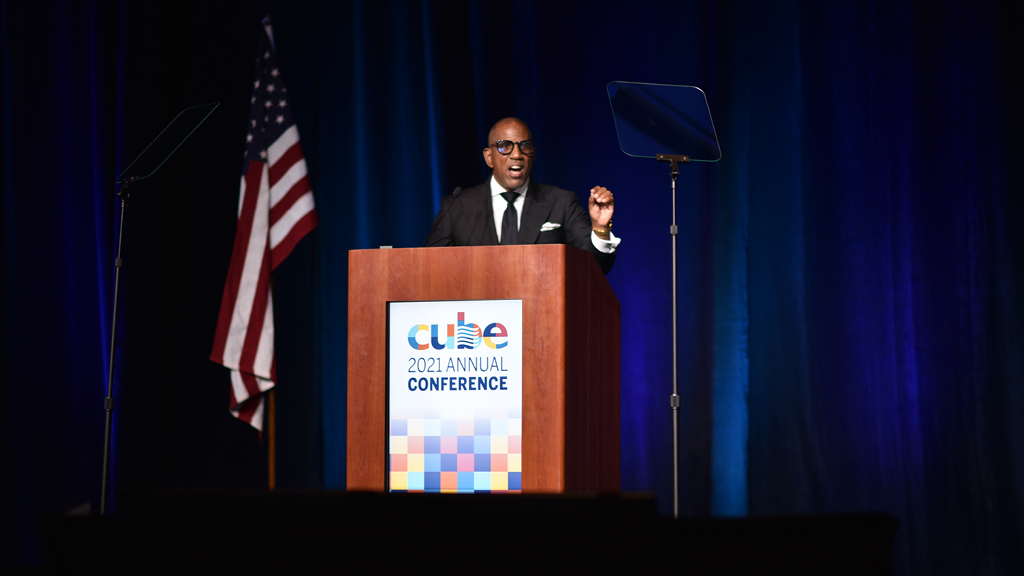 School board members and other educational leaders must become deliberate disruptors in the fight to improve education for the children, districts, and the communities they serve.

That was the message delivered by Dr. Steve Gallon III, steering committee chair for the Council of Urban Boards of Education (CUBE), during his State of Urban Education address on Thursday, the opening day of the 2021 CUBE Annual Conference in Atlanta.

Invoking the words of Rep. John Lewis, the late civil rights icon, Gallon said disruptors must be willing to “get into some good trouble.”

He noted that when he was elected to Florida’s Miami-Dade County Public School Board in 2016, the district was hailed for its award-winning reputation. It had earned numerous prizes, including as the nation’s top urban school district and as the nation’s top magnet program. At the same time, however, many of its Black, poor, and Hispanic students were not succeeding. Many of these students were “catching academic hell and drowning in an ocean of underperformance,” Gallon said. “That had to be disrupted.”

Additionally, African American businesses were not getting a fair share of the district’s $5 billion budget. “We had to disrupt that too,” he said.

True educational change, reform, and revolution is a “contact sport” that demands getting in “the field of play” and a willingness “to tackle or be tackled,” said Gallon, a veteran teacher, principal, administrator, and district superintendent.

He reminded school board members that they “hold the key to unshackle large populations of students who are trapped in perpetual failure and generational poverty.” Board members who remain silent on these issues are “complicit” in these injustices, he added.

As the nation grapples with the ongoing COVID-19 pandemic, the highly political discourse around masking, debates about in-person or virtual learning, and “the devastating academic regression of Black, Hispanic, and poor children” caused by the pandemic, the challenges before boards are more trying than ever before, Gallon said.

Educational leaders must “remain ready, willing, able, and unapologetically and courageously committed to stand, speak, and fight for our children and community.”

While the current state of urban education is important, it’s not as important as its future, Gallon said. And that future is based on the decisions that board members make to reject mediocrity in their schools and to “stand, speak, and fight like hell to disrupt the status quo that allows and enables it.”

He urged conference attendees to battle the “academic and societal injustices that devastate schools, devalue communities, and deny children.” He called for “courageous conversations” to address the role that race, politics, and economics play in the miseducation of students.

Finally, Gallon reminded board members of the power that they hold to revolutionize education through school board policy.