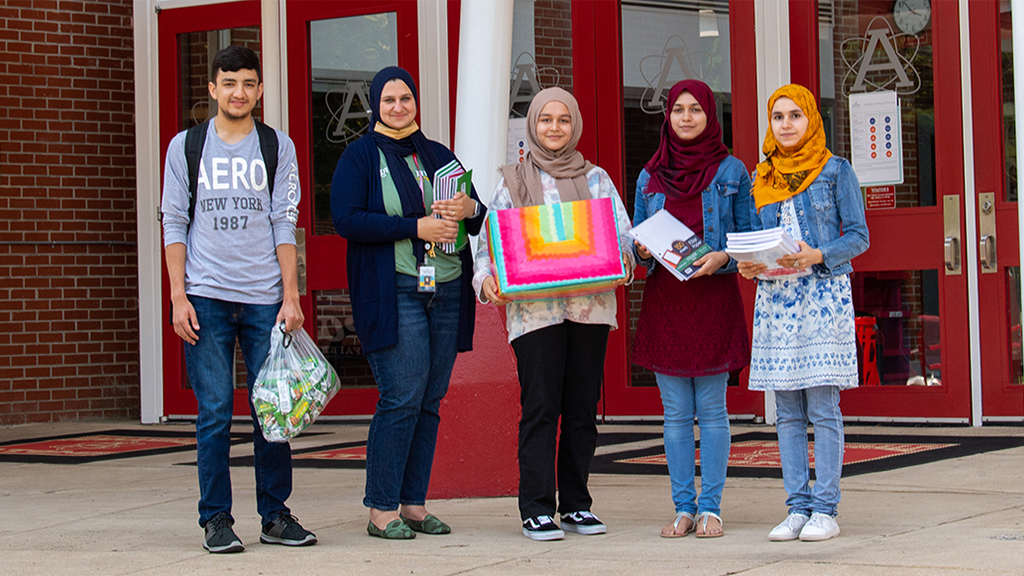 Districtwide programs that support English as a second language, cultural proficiency and inclusion, and social-emotional learning are increasingly a mainstay in public schools. For school districts welcoming thousands of refugee students from Afghanistan, these programs are proving essential to the successful transition of newcomer students.

They set the stage for the other supports and outreach—including academic assessments, language translation, health screenings, tutoring, and cultural orientation—that are needed to help these newest students adjust to, and for their parents to engage with, their schools, says Salimah Shamsuddin, coordinator for Texas’ Austin Independent School District’s Refugee Family Support Office.

The 75,000-student district has been providing newcomer services for well over a decade, with her office serving as the language and resource hub for refugees and asylum-seekers.

“Each family has such unique needs,” Shamsuddin says. “We try to direct our services based on individual need and circumstances.”

An asset, not a burden

In September, the Biden administration requested funding from Congress to help settle 95,000 Afghan evacuees expected this year and next, The Associated Press reported. The first wave of those school-age evacuees has begun arriving in U.S. schools.

More than 380 of about 800 refugee students currently attending Austin ISD are from Afghanistan, Shamsuddin says. By mid-October, 18 new students had enrolled in the wake of U.S. troops withdrawing from the country in late August.

The local refugee resettlement agency, Refugee Services of Texas, indicates that the district could receive around 100 families before the end of the year.

A key to successfully welcoming and supporting newcomer students and families begins with “suspending biases” and embracing their presence as an asset, not a burden, says David Kauffman, Austin ISD’s executive director of multilingual education. “Celebrate the cultural diversity that our refugee families bring. It’s a gift.” To assist students and parents arriving and speaking little or no English (Dari and Pashto are the two official languages of Afghanistan), district interpreters are essential during registration and intervention sessions. Shamsuddin’s multilingual refugee support team speaks 10 languages between three staff members. One member speaks Dari, along with Farsi, a related dialect. For added support, Austin ISD contracts with in-person interpreters and an over-the-phone translation service.

In the classroom, all elementary school teachers in the district are certified to teach English as a Second Language (ESL); at the secondary level, most English 1 and English Language Arts teachers are ESL certified.

In Virginia, approximately 1,100 of Fairfax County Public Schools’ 178,000 students were born in Afghanistan, says Rich Pollio, the district’s director of English for Speakers of Other Languages (ESOL) Services. Less than two months into the new school year, Fairfax had added 97 new Afghan students to its rosters.

Although the county is not a designated refugee resettlement community, the large, ethnically diverse metropolitan area attracts a significant Afghan population.

To assist with the classroom transition, Fairfax County added a “newcomer curriculum” that’s focused less on reading and math and more on “activities, using technology, study skills, some basic literacy, but also getting to know your new school and the folks who are there to help you,” Pollio says.

Shamsuddin’s Austin ISD office works with the University of Texas Center for Middle Eastern Studies to provide academic and social mentoring for newcomer students. In addition, she leads professional development sessions for teachers and staff on making classrooms and schools more inclusive.

Subject matter ranges from cafeteria foods that do not meet Islamic dietary guidelines to the word “Afghan” being the correct adjective to use when discussing students or families from Afghanistan—not Afghani, which is the currency in Afghanistan.

Her sessions also focus on identifying trauma and facilitating mental health resources. “We have to consider that they may be going through something really drastic, and what does that mean for them in the classroom and how does that affect their learning.”

Engaging refugee parents and helping them see that they have a place in the school community is at the heart of California’s Cajon Valley Union’s Family and Community Engagement (FACE) department. The 17,000-student K-8 school district expects to receive about 100 families from Afghanistan this year, says Michael Serban, the FACE director.

The district’s engagement and relationship-building with newcomer families was recognized with an ASBJ Magna Award in 2020 (https://nsba.org/ASBJ/2020/April/first-place-magna-awards).

Community liaisons who speak the language of the newcomer family are “essential to bridging that initial gap,” Serban says. “They have an intimate knowledge of what our families need and how to support them.”

The important role of liaisons was underscored in August when it was discovered that eight Cajon Valley Union families were stranded in the turmoil that erupted as U.S. troops completed their withdrawal from Afghanistan. The families had traveled to the country in early summer to visit relatives.

Their precarious situation came to light because a family alerted a FACE liaison.

School officials and the liaisons reached out for help from their representative, Congressman Darrell Issa, and local leaders. They eventually secured safe passage home for seven of the eight families.

As of mid-October, the remaining family has not been able to safely reach Kabul Airport and is in hiding, says David Miyashiro, Cajon Valley Union superintendent.

“We haven’t given up hope and will not stop until they are home,” Miyashiro says. “Not just them, but all of the students.”

Miyashiro is urging superintendents in other communities with high Afghan populations to investigate whether they have students and families who traveled to Afghanistan but have not been able to return home. Without a collective effort to raise awareness about this situation, “many of these kids may never return,” he says.