When the Social Security and VA checks arrived every month, Elva Munoz would scoop up her three children and go to the bank. It was the 1960s, and Series E Bonds with a face value of $25 sold for $18.75. Munoz would purchase three bonds: one for each child’s college education. The memory of that monthly ritual has stuck with Munoz’s youngest child, Viola M. Garcia.

“You think, ‘what is $25 a month going to help pay for when you have tuition and fees at colleges and universities?’ But it was just the idea, the very idea, that my mom had this expectation,” recalls Garcia, who now serves as the 2021-22 president of NSBA. She is the longest-serving school board member in Texas’ Aldine Independent School District.

The expectation that her children would receive a higher education was not typical for the rural farming-ranching community where Munoz lived. Nor was it typical to have that expectation for Garcia in an era when many women—especially Latinas—did not pursue postsecondary opportunities.

But Munoz understood the value of education and the promise it offered her children.

That “kernel of belief,” as she calls it, has guided Garcia. Her personal, professional, and volunteer life have all been interrelated, and at the core of them all has been education.

In recognition of her monumental service to the district and its students, Aldine ISD named a new middle school in her honor. Garcia Middle School opened in 2018.

Looking back, Garcia attributes much of her success to a desire to honor her mother’s sacrifice and to being in the right place at the right time. Looking forward, she wants to continue to repay “the good that has come to me.”

Garcia grew up in a small south Texas town approximately 40 miles west of Corpus Christi. Surrounded by extended family members, Garcia remembers running around the neighborhood with her two older brothers until dinner and playing at her cousin’s house. It’s the kind of town where everyone knows one other.

In fact, Garcia and her husband Jorge grew up together. They married after Garcia graduated college and moved to Houston for job opportunities.

But when Garcia and her husband decided to grow their family, they knew that their children would have a very different experience growing up in a major metropolitan area. Garcia understood as an educator the importance of early childhood development.

They decided that Garcia would stay home with their three daughters. She had no idea that this choice would one day propel her to becoming the first Latina president of NSBA. 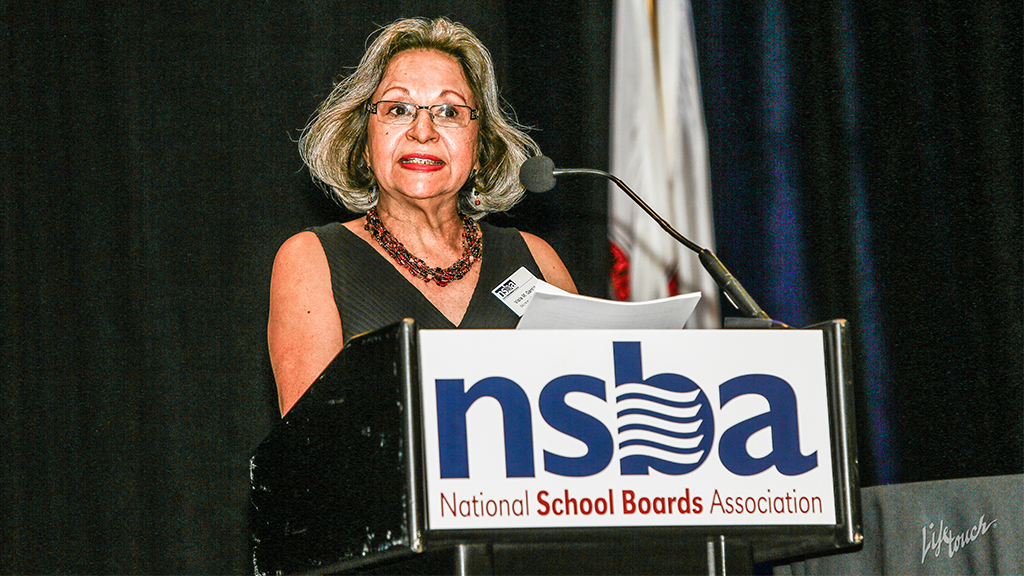 While raising her children, Garcia became active in their school and extracurricular activities. She joined the PTA and served as a Girl Scout Troop Leader. When a vacancy on the Aldine ISD school board was announced, Garcia’s name came up in conversations. She was appointed in 1992 and has been reelected ever since.

Rose Avalos—a former Aldine teacher, counselor, program director, and principal—met Garcia nearly 30 years ago and was struck by Garcia’s commitment to and knowledge of education.

In 2005, Avalos retired and ran for a seat on the school board. During Avalos’ first year, Garcia modeled for Avalos how to prepare for board meetings and how to effectively serve.

“Once I became a fellow board member, I was convinced even more of her dedication to providing the best educational opportunities for kids. I was convinced of her qualities to lead.”

During her tenure, Garcia has held all four board offices and chaired numerous committees.

The district has changed a lot in Garcia’s nearly three decades of service. When she joined, Garcia was the only woman on board. Now, there are four women and three men. District enrollment has increased from 43,539 in 1993 to 67,000 today. The Texas Association of School Boards (TASB) bylaws set aside board positions for large districts, and Aldine qualified for a seat. Garcia already was an active member of TASB and participated in its board development program when the delegate assembly elected her to the board of directors in 2001. After serving as TASB’s 2012-13 president, Garcia was nominated to serve on the NSBA board of directors by the TASB Executive Committee.

Garcia became NSBA president during the pandemic, but her steadfast leadership has helped the organization weather the storm. Much of her work as president has been focused on serving the needs of state school boards associations and supporting a safe transition to in-person learning.

It wasn’t until after she left her hometown to attend Texas Woman’s University that Garcia realized she grew up in poverty. Almost everyone in her community was poor, so she didn’t know any different. But there were signs.

Garcia’s father died when she was 9, and the family moved in with her grandfather. Social Security and the VA checks from her father’s service in WWII kept them afloat, but there wasn’t any extra cash. Garcia remembers picking cotton and wearing her brothers’ hand-me-downs.

Garcia’s experience with poverty helps her understand the severe challenges facing her district.

Aldine ISD serves nine communities that are part of the city of Houston and unincorporated Harris County. Nearly 90 percent of students receive free and reduced-price lunch.

Because the large urban district is so spread out, many students do not have the same easy access to extended family and friends that Garcia had growing up in a small town.

Garcia recognizes that the services school districts provide must extend well beyond academic support and resources. At Aldine, each elementary, intermediate, middle, and high school campus has at least one school counselor.

At the same time, high expectations are key. Garcia’s mother made it clear that she expected her children to succeed in school. This expectation was communicated explicitly and implicitly. Not until many years later did Garcia realize that the first time her mother bought herself new clothes was to celebrate her brother’s high school graduation. 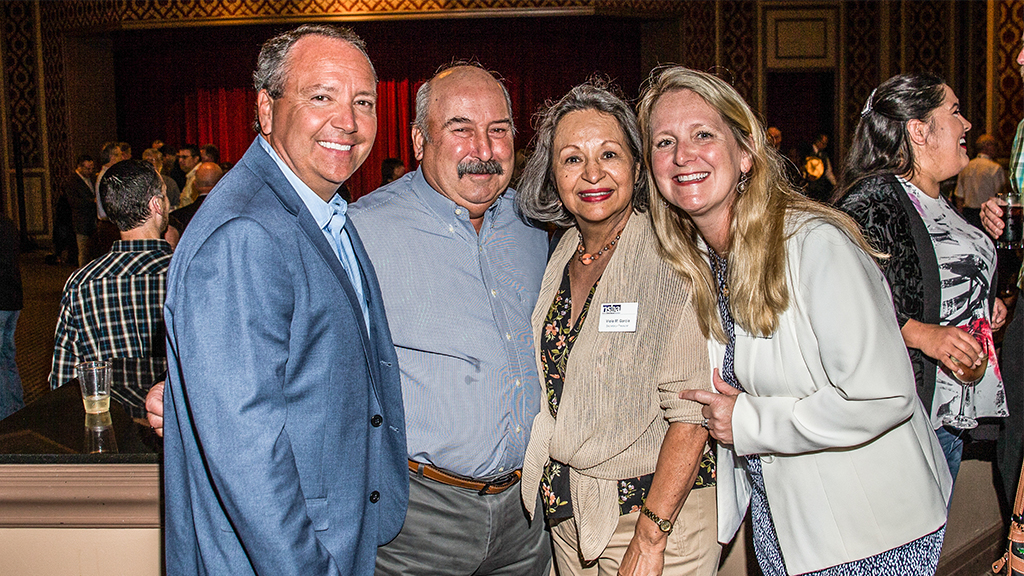 One of Garcia’s proudest accomplishments from her board service is expanding college opportunities for students. Through dual enrollment, students can graduate high school with an associate degree. Additionally, Aldine offers a multitude of career and technical education options. Students can earn certificates and licenses in programs of study such as welding, accounting, animation, engineering robotics, education, health science, paralegal studies, aeronautics, and cybersecurity.

These options can be transformative for both students pursuing a career right after high school or those going on to college.

“The beauty of it is that when I look at myself, and others like me, who have come out of poverty, it is all because of education,” says Garcia.

Unsurprisingly, Garcia considers herself a lifelong learner. Taking advantage of professional development opportunities led her to leadership roles at TASB and NSBA. It also served her well in her career, which culminated in the creation of an educator preparation program that continues to produce highly sought teachers.

Garcia joined Houston ISD as a bilingual teacher in 1971 and later became a certified special education resource teacher. By then, in the mid-70s, a new partnership between the University of Houston and Houston ISD began to develop leaders of color. Garcia already had earned credits in a master’s degree program in curriculum and instruction at the University of Houston, so she jumped at the opportunity. The administrative leadership program placed her under the mentorship of several principals before she took over as principal of Helms Elementary in 1977.

Those experiences plus her board leadership helped Garcia transition into postsecondary education. After raising her daughters, Garcia returned to work as an ESL instructor at a community college. When a new Texas law required all incoming college students to pass the Texas Success Initiative Assessment or receive intervention, Garcia taught students developmental reading, first at the community college level and later at the University of Houston-Downtown.

While teaching, Garcia pursued a longtime dream of earning her doctorate. As she completed her dissertation, the University of Houston-Downtown launched a teacher preparation program and needed professors to train future educators. It was the perfect role for her.

Garcia is extremely proud of the teacher preparation program and the highly trained teachers she helped produced. The University of Houston-Downtown’s teacher program emphasizes experiences in the school setting, so instead of the traditional one semester of student teaching, students teach at local public schools—like Aldine ISD—for three semesters.

Occasionally, Garcia will run into former students who are now teachers. She’s filled with a sense of accomplishment each time they thank her.

“I feel as if I really have participated in the continuation of the teaching profession,” she says.

Garcia retired in 2015 after seven years as assistant chair of urban education and two and a half years as chair. The university granted her emeritus status, recognizing her distinguished contributions to the department and to the field of education.

Garcia is excited to be leading NSBA at such a critical juncture. On her mind is how to continue to move the organization forward and support its members.

“It’s not just one person,” she says, “so much of it is the collective will for us to work together to do a better job because our kids deserve it.” 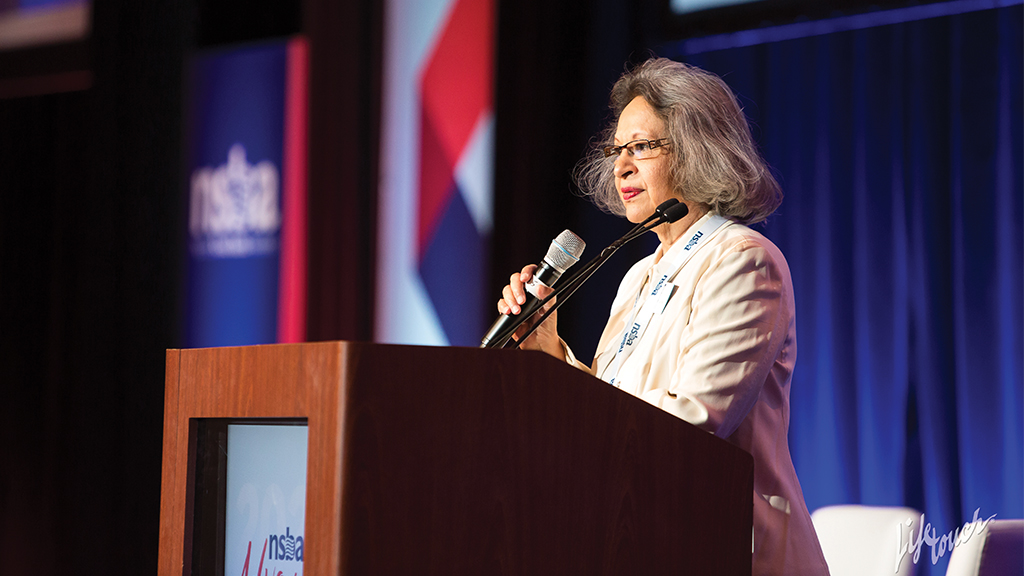 Garcia’s term ends in April, but the work will continue. She finds comfort in knowing that there’s something more that she can do because “the need is great.”

“We need to preserve what public education has been able to do for so many people and will continue to do, and we need to fight for public goods—sound public education for all of our students, not just some of them.”

When Garcia looks back at her mother’s sacrifice, she sees the effects still rippling like wind through a field of wheat. Her daughters went to college after graduating from Aldine’s Dwight D. Eisenhower Senior High School. They now enjoy successful careers, one in psychiatry, another in biochemistry, and the third in biomedical engineering. Garcia’s oldest grandchild will be entering first grade soon.

The rippling effect also extends to all the students Garcia has influenced as a teacher, principal, professor, and board member, improving the lives of children and their families for generations to come.