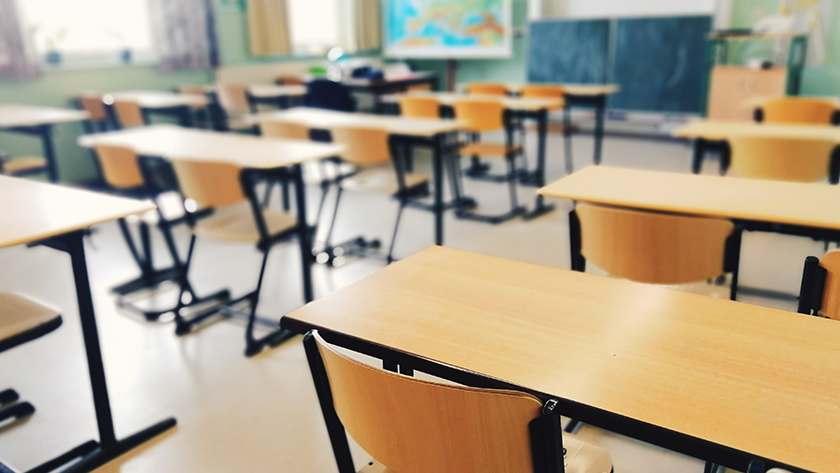 Michael Testani, superintendent of Connecticut’s Bridgeport Public Schools, started his professional career in the community more than two decades ago. The lifelong resident, former school counselor, and former adult education director is no stranger to the district’s long struggle with absenteeism and the harm to students who miss excessive school days. It’s a struggle that escalated during the ongoing COVID-19 crisis for Bridgeport and school systems nationwide.

Pre-pandemic, Bridgeport put in extensive work to reduce its districtwide chronic absenteeism rate, an effort that was producing results, says Testani, superintendent since 2019. “We saw significant gains, with some of the historically most challenged schools coming in at 14 percent to 15 percent,” down from 27 percent to 28 percent, he says.

The arrival of the coronavirus and the move to remote learning, however, derailed that progress for one of Connecticut’s largest school systems. Between the 2019-20 and 2020-21 school years, the percentage of students considered chronically absent (defined as missing 10 percent or more of the school year—roughly 18 days—for any reason, excused, unexcused, and suspensions) grew from 19.7 percent to 28.9 percent. At the same time, the state average rose from 12.2 percent to 19.0 percent.

The risks associated with chronic absenteeism include “difficulty learning to read by the third grade, achieving in middle school, and graduating from high school,” according to Attendance Works, a national nonprofit that promotes school attendance.

The 19,400-student Bridgeport district was not alone in its attendance setbacks. A May 2021 report by FutureEd, a think tank at Georgetown University, analyzed data from five unnamed school districts serving roughly 450,000 students in various parts of the country. It found “striking levels of severe absenteeism,” including “a sevenfold increase in the number of students missing 50 percent or more of the school year during the pandemic.” In one system, the percentage of students absent half the school year rose from .9 percent in 2019-20 to 7 percent in 2020-21.

With funding and support from a Connecticut state program—The Learner Engagement and Attendance Program (LEAP)—launched last spring, Bridgeport mobilized a comprehensive effort to reduce and reengage missing students and families. “We’ve done a lot of outreach” to help families who struggle with behavioral and mental health, housing, child care, technology access, and other issues that often keep students out of school, Testani says. Simultaneously, the district expanded programming that makes schools more inviting and appealing and encourages families to get their children into classroom seats consistently.

It’s an approach far removed from the “more heavy-handed, punitive” response that schools once employed to address absenteeism. Threats of juvenile court rarely worked, Testani says, and they failed to build a positive relationship between school, parents, and students.

Approximately eight million students—1 in 6—experienced some level of chronic absenteeism before the pandemic, according to a 2021 report by Attendance Works and the Everyone Graduates Center at Johns Hopkins University’s School of Education. Using 2017-18 national data, the report found that chronic absence was pervasive in a quarter of U.S. schools, with more than a quarter of schools having either high (20 percent to 29 percent) or extreme (30 percent or more) levels of chronic absenteeism.

Although some of these pre-pandemic numbers were likely related to health concerns and issues such as bullying, with a quarter of schools showing chronic absences, “at some level, (students) were voting with their feet,” says Bob Balfanz, director of the Everyone Graduates Center. Low attendance is a sign that students “were not engaged; they didn’t see the point; they didn’t feel connected” to their school.

Low school attendance rates tend to “follow the contours of poverty,” says Hedy Chang, Attendance Works founder and executive director. “For both urban and rural areas where there are pockets of poverty, you see higher levels of chronic absence.”

Producing timely, reliable pandemic attendance numbers as the country shifted between multiple learning modes—remote, in-person, and hybrid—proved to be a challenge for many states and districts, Chang says. According to a report by the Center on Reinventing Education, only 27 percent of a nationally representative sample of 477 school systems even took attendance in spring 2020.

Still, there is data that shed light on the extent of the problem:

An analysis of standardized monthly attendance data by the Connecticut State Department of Education showed substantially lower attendance levels among vulnerable student populations, including Black and Hispanic/Latinx students, English learners, students with high needs and disabilities, and those living in poverty and experiencing homelessness. (Connecticut used the data to help craft its LEAP program supporting Bridgeport and 14 other districts facing declining enrollment and higher levels of chronic absence. Attendance Works served as the advisor to the project.)

An analysis of 2020-21 attendance data from 33 California school districts conducted by Social Innovations & Achievement, a company that provides programs to districts to reduce school absenteeism, found chronic absence rates nearly doubled for Hispanic/Latinx and African American students, with increases from 11.5 percent to 19.5 percent and 16.2 percent to 29.2 percent, respectively. Among Native American youth, rates rose from 15.2 percent to 24.3 percent.

“These are also the same populations most challenged by chronic absence prior to COVID-19,” Chang notes.

“We’re seeing lots of anxiety, and that’s resulted in school avoidance,” says Jacqueline Rodriguez, director of student support services for California’s Sacramento City Unified School District. The initial wave of the pandemic, followed by the Delta variant and then the highly contagious Omicron variant, had some parents frightened for their children’s safety and kept them out of school, Rodriguez says. Those fears hit hard in a community where “we’ve really had a lot of our families struggle with illness and loss of life” due to the virus. The 43,000-student district had a chronic absence rate of 25 percent in 2020-21.

Chronic absenteeism is often generational, adds Lisa Utterback, chief of student and community services for Nebraska’s Omaha Public Schools. “When we see a high school student with a history of being chronically absent, we often start to see those trends in younger siblings.”

Following December’s winter break, many communities temporarily shifted back to remote learning due to high COVID transmission rates. In Detroit, the first week of temporary remote learning saw attendance as low as 53 percent before climbing to the mid-70s.

“I think it was just about students and families shifting, acclimating to the timeline, and knowing we were online,” says Nikolai Vitti, superintendent of Detroit Public Schools Community District.

When the 49,000-student district initially welcomed students back to classrooms in September, early quarantine rules unexpectantly contributed to the chronic absenteeism rate, Vitti says. At the time, most students were not vaccinated, and “based on quarantine rules in place at the beginning of the school year, if you were a close contact with someone who was positive, then you were out of school for 14 days.”

Detroit schools have long struggled with a high rate of chronic absenteeism, driven in large part, the superintendent says, by the city’s “concentrated poverty” and “history of racial injustice.” Lack of access to reliable transportation, child care, and dependable, affordable housing, along with health inequities and underemployment, present persistent barriers to attending school.

He also points to the nearly 20 years that the district was under state emergency management, during which “the systems and the processes that we know work to improve attendance and reduce chronic absenteeism were not being implemented with any kind of scale or consistency.”

Sixty-two percent of Detroit’s students were chronically absent in 2018-19, a figure that rose to 69 percent during the 2020-21 school year. About 54 percent were labeled severely chronically absent for missing 20 percent or more of enrolled school days.

When remote learning first launched, not having the necessary technology and not having family members comfortable supporting students at home intensified the hurdles to virtual schooling. In some cases, the result was “a discontinuation of learning,” Vitti says. Some students turned to the workforce to help their families financially. Some families “just disengaged” because online learning was not possible at home.

“That discontinuity, I think, led to a new lifestyle of not coming to school every day,” he says. “We’re trying to break that.”

It’s a sentiment echoed by Bridgeport’s Carli Rocha-Reaes, director of school counseling and parent partnerships. “In some families, school just wasn’t the priority. Priorities shifted to basic needs and getting through this pandemic.” 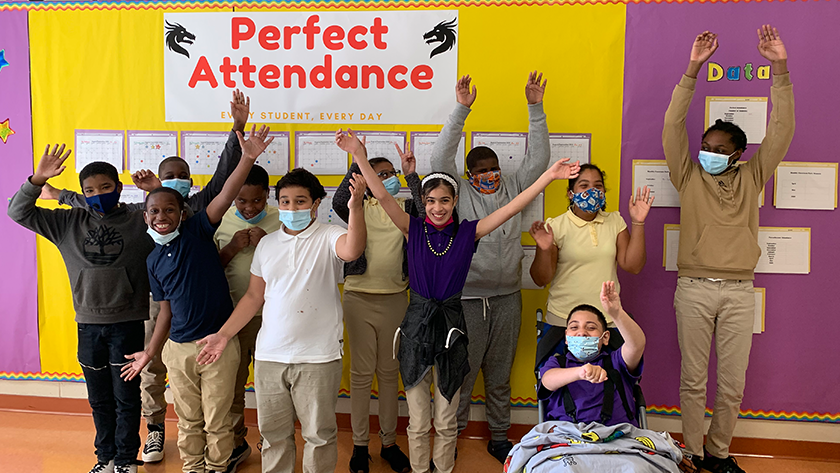 In a study of the barriers to school attendance in Sacramento City USD conducted by the UC Davis Center for Regional Change, school officials learned “what really motivated our students to come to school and our families to support attendance was if they felt welcomed and they had a sense of belonging. That they were connected to some adults on campus,” says Rodriguez.

In Nebraska’s Omaha Public Schools, an attendance data dashboard allows building leaders and the attendance team at each school to monitor attendance patterns and trends for every student. That data serves as an early warning system for potential attendance issues, says Utterback.

“We are able to identify students not necessarily chronically absent, but who are on the cusp for being at risk.”

The dashboard and attendance teams are vital components of the district’s Strive for 95 initiative. Research shows that students who attend school 95 percent of the time (missing fewer than 9 days a year) are more likely to be on or above grade level academically, be socially and emotionally connected to the school and staff, and remain on track to high school graduation, she explains. In 2019-20, about 25.7 percent of the nearly 52,000-student district missed 10 percent or more of the school year.

Another critical piece of Omaha’s attendance initiative: professional development designed for school bus drivers, security staff, and administrative assistants, as well as educators and administrators, on why attendance matters.

Bus drivers are “the first ambassadors” that see students at the start of the day, Utterback says. And when late students enter the building, school secretaries and security staff need to understand that students aren’t always in control of their arrival time or the events that transpired at home.

In Bridgeport, the district’s focus emphasizes relationships with students and families as the key to reducing chronic absenteeism. That means ensuring that the foundational supports that make school a welcoming, enriching environment that meet students’ varying needs are in place.

To achieve that, staffing for the home visitation program has been expanded; more school counselors and social workers have been hired to address behavioral and mental health issues, and an attendance monitoring team has been launched.

In addition, programs focused on tutoring and mentoring, student success, restorative practices, and social-emotional learning are in place.

“Sometimes it’s a matter of answering a simple question that a parent has that for whatever reason, they didn’t feel like they had access to that information. Sometimes, it’s a matter of making that connection with the family to the school,” says Lynn Stephens, coordinator of family and community engagement for the district. “That’s where we’re seeing our success stories —that little extra step of engaging the family back with the school.”

Says Rocha-Reaes: “When students feel that sense of belonging in their schools, when families feel a strong relationship to administrators and teachers in the buildings, that’s how we get students back to school.”