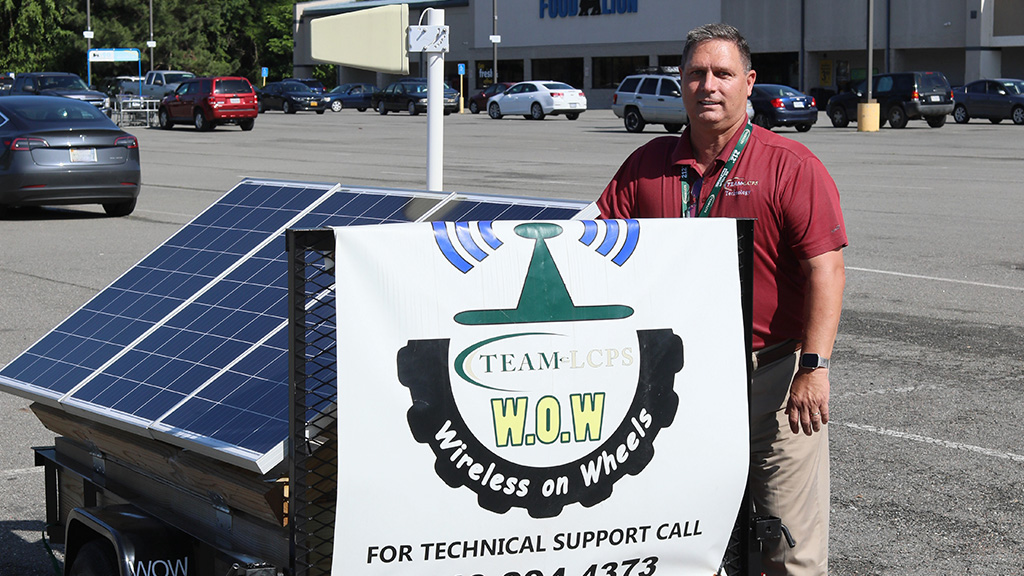 Like many school leaders at the start of the pandemic, Doug Straley and David Childress knew students in their rural Virginia district would have issues connecting to the internet as they tried to attend school from home.

“We wanted hot spots around the community, so we started putting them on buses and in other places,” says Straley, superintendent of Louisa County Public Schools, which serves 5,000 students. “We knew we’d hit some snags with electricity in parts of the county, and we couldn’t staff the buses at night or on weekends, so it wasn’t a perfect solution.”

Childress, the district’s technology director, went to Straley with an idea: Let’s develop and build hot spots that use solar energy instead of electricity. The result: Solar-powered Wireless on Wheels (WOW) trailers are spread across the 511-square-mile county located between Richmond and Charlottesville.

“We had been working to convert our four elementary schools to solar since 2019, and I thought it could work,” Childress says of the WOW trailers. “Within a week and a half, we built the first prototype. We put it in the Food Lion shopping center that weekend and a number of people started to use it without us even advertising it. That’s when we knew we had a hit on our hands.”

School districts are starting to look at solar power as a viable alternative as they struggle to deal with skyrocketing energy costs—the second largest expenditure after personnel—crumbling infrastructure, and increased pressure to address their role in climate change. Today, more than 7,300 schools serving 5.3 million students utilize solar, an 81 percent jump over the past five years, according to Generation 180, a clean energy nonprofit.

While it’s a small percentage of the total schools in the U.S., the trend mirrors the rest of the U.S., where renewable energy has nearly quadrupled over the past decade as the cost of solar panels has come down. Today, renewable energy provides about 20 percent of the nation’s electricity. The U.S. Department of Energy has estimated that solar panels could provide as much as 45 percent by 2050.

“For schools, solar is perhaps one of the easiest ways to enter into green initiatives,” says Erika Kitzmiller, an assistant professor of education and inequality at Barnard College. “It’s not a huge expenditure, and you don’t need to redo your building for it to be effective.”

At the same time, school districts are embracing solar by incorporating it into career and technical education training and expanding STEM opportunities for students. In Louisa County, 10 of the 32 WOW trailers were built by high school students taking wind power and solar energy classes.

“What’s exciting about this work is seeing more and more schools starting to understand the opportunity that having onsite clean energy can bring, from cost savings to student engagement and learning,” says Tish Tablan, a program director at Generation 180 and author of Brighter Future: A Study on Solar in U.S. Schools. “Educators want to see successful models they can follow, and we’re seeing more and more of these in schools.”

School districts spend $8 billion a year on energy, in large part due to older buildings and buses that run on diesel fuel. According to Generation 180, the amount of carbon dioxide that schools emit is equal to 8 million homes or more than 18 coal plants, and 95 percent of the 560,000 school buses in the U.S. use diesel fuel, which is expensive and produces large amounts of pollution.

Kitzmiller says solar heating units are more efficient and effective than the older boiler systems found in under-resourced and urban areas. She points to the closing and early dismissal at schools in Detroit, Baltimore, Philadelphia, and other districts because of a lack of air conditioning in May as an example of “things needing to change.”

“We have a long history that we’re trying to undo,” she says. “We’ve got boiler systems that are over 100 years old in some schools and antiquated HVAC units that present health risks because of the heat. We need to look at solar power and other clean energy methods instead of just adding air conditioners. The same methods we’ve been using are not going to reduce the carbon footprint or be cost-effective for the school district. “

In April, the Biden administration announced a $500 million grant program to improve energy efficiency in the highest-need public schools. That money, combined with COVID-relief funding that can be used on school facilities as part of the American Rescue Plan, is the largest federal investment in school infrastructure since 2009, Tablan says.

“The new federal funding coming in is a nice windfall because it’s been 13 years since there was a really significant investment in this area,” she says. “Typically, you don’t want to wait for grant funding because there’s not a lot out there, but this will help.”

One reason for solar’s growth in schools, Tablan notes, is because legislators in 28 states and the District of Columbia now allow districts to contract with third-party developers who pay for the panels as well as their installation and maintenance. In turn, schools allow the panels to be installed on roofs or other district property and buy the electricity produced by the developer for a certain period.

The impact can be felt on districts of all sizes, Tablan says. Arizona’s Tucson Unified School District has 73,000 solar panels that provide nearly half of the energy for its 89 schools. The district expects to save $43 million over the next 20 years. The Midd-West School District in central Pennsylvania, which serves 2,177 students on four campuses, expects to save $9 million over 40 years using two large ground-mount arrays of panels. Midd-West is planning to add more panels to generate additional electricity to sell back to the developer as an ongoing source of revenue.

“What we’ve found is when there are opportunities to save money, school districts are open to hearing about it,” Tablan says. “No matter what their views may be on climate change or their political beliefs, they want to use their money wisely and serve their communities better.” 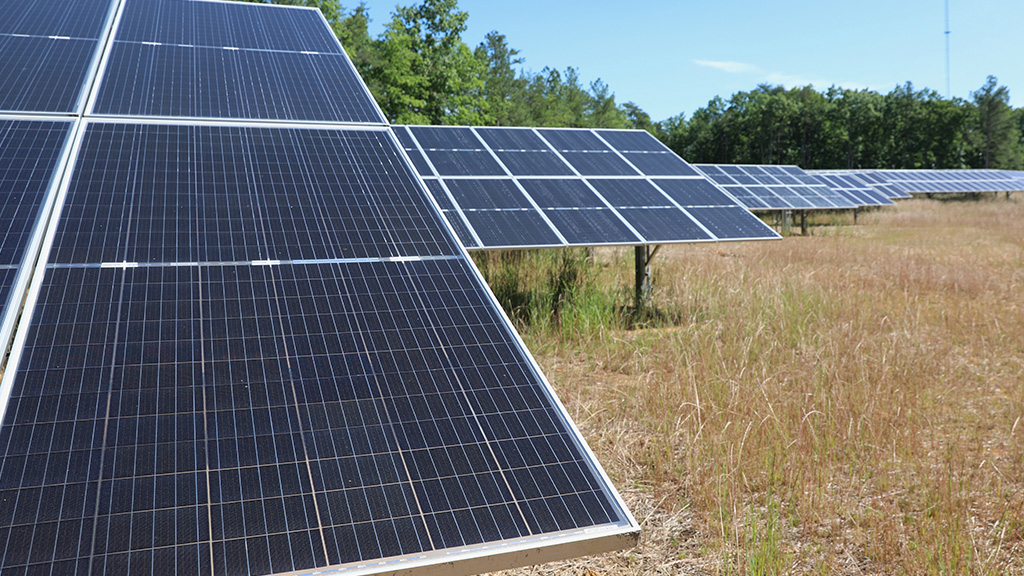 Hester, who had been an assistant superintendent in Topeka, Kansas, arrived in Batesville with a mandate to right the district’s financial ship. Several small older schools, absorbed into the district as part of a statewide consolidation effort more than a decade before, were driving up Batesville’s utility costs.

“Utilities were where we spent our money, and we had to make some tough decisions about letting campuses go,” Hester says.

Eventually, the district consolidated buildings and campuses to reduce its overall footprint. Batesville also hired Entegrity, a consulting firm focused on energy efficiency and building sustainability, to look at ways to save on utility costs. In March 2018, using state-authorized bonds, the district became the first in Arkansas to install solar on its campuses. Other upgrades included updated lighting, thermostats, windows, water fixtures, and HVAC units.

“We went with a defensive plan for efficiency and an offensive plan for solar,” Hester says. “When we sealed the buildings and made sure they were heated and cooled properly, there was no need to jack the thermostat up and down. It’s been a huge win for us.”

Today, solar panels sit on top of a large canopy at the loading zone for the high school. The canopy, which Hester says “feels like a little international airport,” shelters students in the snow and rain. The panels on top of it, and others installed on district land, generate 750 kilowatts of renewable energy annually.

When the district signed its contract with Entegrity, the company guaranteed at least $2.4 million in energy savings over 10 years. Hester estimates the amount will be far greater, given ongoing increases in utility costs. “The numbers they gave us were very conservative and very achievable,” he says. “The estimated savings were based on a 2.1 percent annual increase in electricity costs, and we blew that out of the water in just the last year alone.”

The best part, according to Hester, is the school board voted to use the savings for teacher raises. “It took us from the lower quartile in the state for teacher pay to the upper half in pay in the state,” he says. “Everything has gone up so much during the pandemic. We’ve seen a 30 percent increase in fuel and food costs. We would not have been able to keep our staff intact if we hadn’t been able to get them a raise.”

Batesville now has solar panels at each of its campuses. The district is partnering with the local hospital to add more panels at an offsite location, and the city is adding floating solar panels to its wastewater treatment facility.

In Louisa County, the Wireless on Wheels program has been a huge success, providing internet service at a relatively low cost. Each unit costs about $3,500 and takes about half a day to build. Once completed, the wireless signal has a range of 200 feet.

Childress says he’s been contacted by schools across the country about WOW and says the district is willing to share its plans for free “as long as you’re not trying to make money off of it somewhere else.” The district has set up a website (wow.lcps.k12.va.us) with drawings, instructions, and a parts and materials list for other schools to use.

“They’re not difficult to build at all,” Childress says. “Once you have the parts, you can build one in a few hours. And when the students built them, they were able to see how others benefitted from them as well. It’s real-world problem-solving.”

Even though students are back in class and more people have returned to work, the district plans to continue to make the units available and maintained.

Installation of solar panels at the district’s four elementary schools was completed this winter. Louisa County’s middle school and high school are up next, and the district has received grants to add panels at the central office as well as electric vehicle chargers at every campus. Straley says the district expects to save at least $8 million in utility costs over 25 years.

“Our goal with solar is to save as much money as we can so we can provide our kids with a better education,” Straley says. “But the WOW units haven’t been just for students. You can see adults out there working as well because many jobs still haven’t gone back to an office, and this is the only way they can access the internet. Given everything schools have been going through, it’s gratifying to know that we’re doing something good for our students, our environment, and our community.”

Glenn Cook (glenncook117@gmail.com), a contributing editor to American School Board Journal, is a freelance writer and photographer in Northern Virginia.