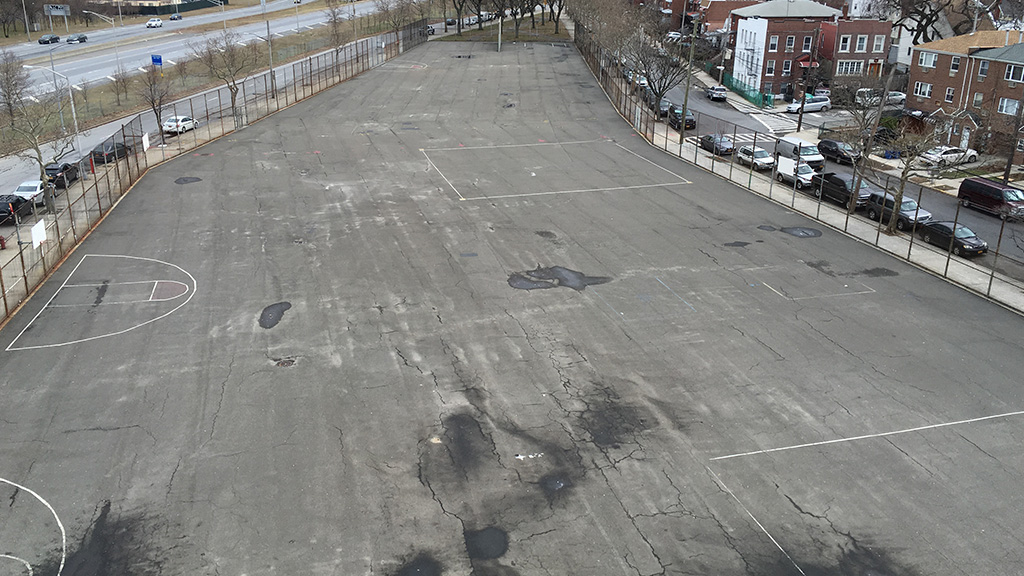 Sometimes, schoolyards are more than the sum of their parts, like when cracked asphalt is replaced with trees, garden beds, turf fields, gazebos, outdoor classrooms, and fresh play equipment. Then, schoolyards take on superpowers that can transform the life of a school.

At Stephen Halsey Junior High School in Queens, New York, for example, the new schoolyard yielded dramatic changes in students, particularly the most vulnerable. Chris Weiss, a veteran teacher, oversees the school’s Green Team, a sustainability club that tends to the schoolyard’s garden beds and trees. He also runs the in-school suspension program, which includes a room where pupils who are having emotional crises or are disrupting the classroom can go for a break.

Weiss decided to enlist those students for the Green Team. “They stopped getting sent down to me,” he said. “Their grades got better. They took more pride in what was going on. They were able to get their hands dirty.”

From an initial group of a half dozen students, the Green Team soon grew to more than 40 members. Weiss believes something profound resulted from the simple act of tending to plants and trees.

Weiss is not wrong. Researchers from the Centre for Research in Environmental Epidemiology of Barcelona, Spain, have studied positive mental health and cognitive outcomes associated with time spent in nature. According to the report, “Natural environments including green spaces provide children with unique opportunities such as inciting engagement, risk-taking, discovery, creativity, mastery and control, strengthening sense of self, inspiring basic emotional states including sense of wonder, and enhancing psychological restoration, which are suggested to influence positively different aspects of cognitive development.” 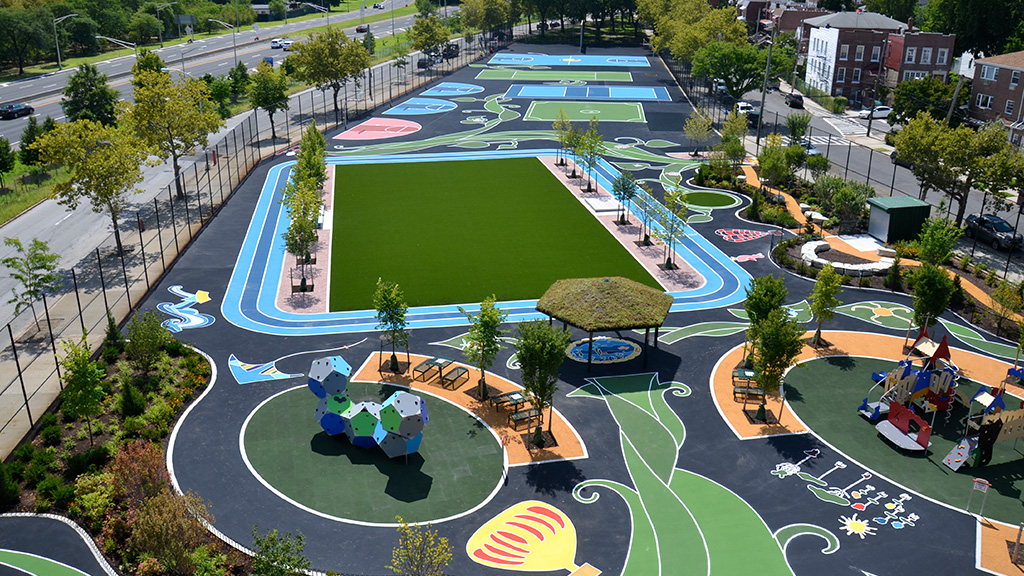 Schools are on the frontline of the mental health crisis facing children and youth today. Planting trees and gardens in schoolyards reduces student stress, as does having positive places to go outside to learn and relax.

Sadly, schoolyards often feel more like parking lots than playgrounds. At their worst, they not only fail to enhance a school community, but they also can drag it down. Covered in blacktop and sizzling in the sun, asphalt schoolyards are potential canvasses for boredom, mischief, and even aggression.

But there is another way. Trust for Public Land (TPL) has pioneered a Community Schoolyards model across the country that turns grim schoolyards into welcoming oases, teeming with nature, and sparking imaginative play. Tree canopy cools school grounds and school buildings, while rain gardens and engineered soils capture rainwater and prevent flooding. Outdoor classrooms enhance learning, offering a venue for science experiments and art classes.

As climate change causes more extreme heat and violent weather, Community Schoolyards—with tree canopy and shade structures like gazebos—also protect students. A recent study by TPL found that 36 percent of the nation’s 50.8 million public school students attended school in a heat island, which is defined as 1.25 degrees Fahrenheit warmer or more, on average, than the surrounding town or city.

Students from low-income neighborhoods and communities of color are most at risk. A data analysis from TPL reveals a disturbing picture. Schools that serve primarily low-income and Black and Latino students are hotter than those that are whiter and wealthier. In areas with the most extreme heat (5 or more degrees hotter than the citywide average), household income averaged $59,000. By contrast, in the coolest parts of town, we found an average household income of $91,000.

“Community Schoolyards projects are not a panacea for decades of underinvestment or systemic racism in public schools and in communities,” says Diane Regas, TPL CEO and president. “But they can give students a positive, invigorating outlet, both during and after school. For a space that measures just a half-acre to a few acres, a renovated schoolyard punches above its weight.”

Vegetation and tree canopy lower temperatures on schoolyards through direct shade and a process known as evapotranspiration, in which trees pull moisture from the soil and release it via leaves. An area of shade can be 20 to 45 degrees cooler than surfaces in full sun, according to the U.S. Environmental Protection Agency.

A tenet of the Community Schoolyards initiative, which has converted more than 260 schoolyards from New York City to Oakland, California, is making schoolyards available to the community after school and on weekends. Such shared-use agreements would go a long way toward addressing the nation’s park-equity divide, in which 100 million people, including 28 million children, do not have a park within a 10-minute walk of home.

Across the country, public schools occupy about 2 million acres of land. By making schoolyards available to the public during non-school hours, 80 million people would have access within a 10-minute walk, including 50 million students who would gain daily access to nature. Through our ParkScore, we have tracked a 30 percent increase in joint use agreements that open schoolyards to the community after school hours.

In addition to giving more Americans a place for respite, exercise, and socializing, renovated schoolyards teach students to be creative problem solvers. Students are at the center of the design. They survey teachers, fellow students, and the community about how to use the new space. They learn about regional climate impacts and how to design nature-based solutions to address flooding, heat islands, and drought. They follow a budget, debate layout decisions, and apply democratic decision-making for the common good.

At the end of the process, students have designed a comprehensive, sustainable, nature-based schoolyard that addresses some of the biggest issues facing their school and community. Most importantly, students realize their role as change agents. Some have even gone on to study engineering, landscape architecture, and environmental design.

In Atlanta, where TPL has helped transform several schoolyards, students have learned invaluable lessons about water systems, climate change, and environmental justice. Summer M. Blackmon, a teacher and STEM specialist at the city’s Centennial Academy, collaborated with TPL on a series of workshops for middle school students, whom she calls scholars.

In one workshop, students studied a map of Atlanta featuring parks and water bodies, as well as industrial sites and landfills. “They noticed that there were much bigger parks in other neighborhoods,” Blackmon says. “We had some scholars verbalize that it wasn’t fair. We want them to think of themselves as activists now that they’ve learned about some of the environmental injustices.” 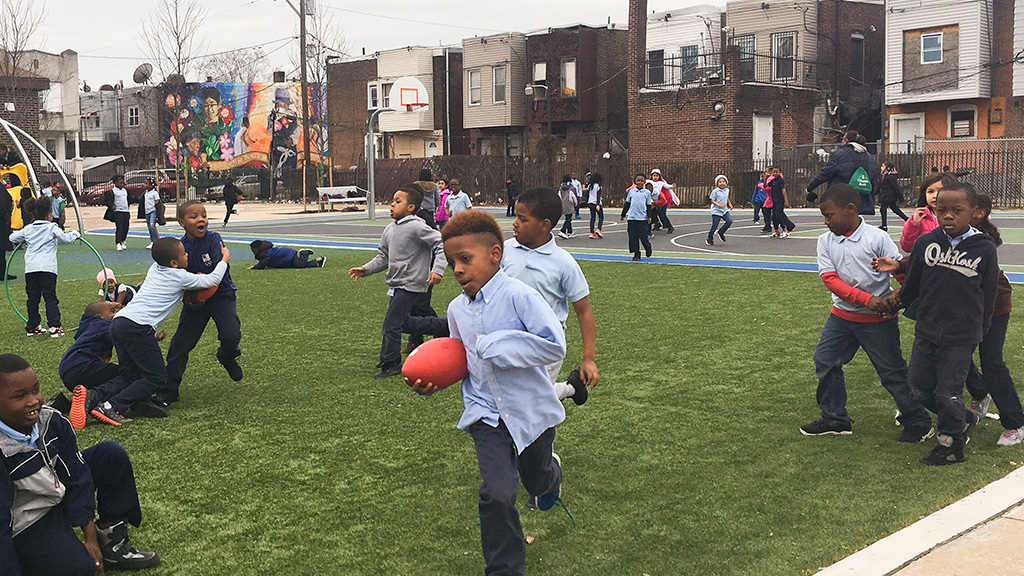 In Newark, New Jersey, we helped renovate the schoolyard at the K-8 Sussex Avenue School in 2015. Darleen Gearhart, the former principal who is now director of mathematics for the city’s Board of Education, described the earlier incarnation of the schoolyard as “basically a blacktop,” adding that it “had one basketball hoop, which wasn’t even in good shape.”

In addition to a turf field and running track, the half-acre schoolyard now brims with trees and flowering shrubs. For the first time, students have access to an outdoor drinking fountain. A sitting area fashioned from large blocks of granite doubles as an outdoor classroom.

Gearhart says the project’s greatest impact was less visible. Average daily attendance climbed from 90 percent to 96 percent after the renovation. Disciplinary actions plummeted while test scores among the 500 students—95 percent of whom qualify for free or reduced-price lunch—rose.

“We were one of the worst schools in the district, and during the eight years I was there, we became one of the best,” she says. “The new schoolyard had an emotional impact on the kids and made students feel safe. When you create an environment where they can fall down on the turf and bounce back, it makes you feel like somebody has your back. It changes your life.”

Indeed, data supports Gearhart’s observations. Researchers from the University of Arizona are evaluating the health and educational impacts the hundreds of TPL community schoolyards in New York City have had on students. In preliminary analyses, researchers found “potentially significant effects of green schoolyard interventions on school-level test scores in elementary school students.”

Some educators report dramatic improvements in student behavior as well. Several years ago at John M. Patterson School in Philadelphia, Principal Kenneth Jessup was so tired of the fighting that frequently marred recess that he considered early retirement. But after the schoolyard’s overhaul, suspensions in the elementary school dropped from 30 a year to zero. Jessup credits the new schoolyard. “The students actually have something to do now during recess, whereas before, it was just an empty space with chunks of loose concrete,” he says.

Given all the benefits of green, engaging, healthful schoolyards, why don’t more school districts commit to renovating them? One reason is the fear (unfounded, it turns out) that such renovations are prohibitively expensive. Our new study, "Green Schoolyards Bring Major Benefits," effectively dispels the misconception among school administrators about the price tag of transforming asphalt-covered and treeless schoolyards into green schoolyards.

We commissioned MKThink, a strategic design consultancy, to conduct a cost-benefit analysis that concluded investments in green schoolyards could return benefits of up to four times the initial cost. “We’ve always known that green schoolyards make common sense for schools, and this study backs that up with dollars and cents,” says Guillermo Rodriguez, California state director and vice president for the Pacific region at TPL.

The study compared the typical cost of building and maintaining a “gray” or asphalt-covered schoolyard in California to a “green” schoolyard over two decades. While gray schoolyards had a moderately lower initial renovation cost ($2.3 million compared to $2.6 million for green schoolyards), they produced no benefits over time, with schools continuing to sink money into resealing asphalt.

After the initial investment, green schoolyards brought in almost $600,000 in net benefits, including increased student attendance and academic performance, greater staff retention, and savings on heating and cooling costs.

Transforming schoolyards improves children’s health and learning, bolsters climate resilience, and expands park access. The funds present an historic opportunity to tackle some of society’s—and public education’s—biggest challenges, adds Regas. “This model has been tested in hundreds of school districts with tremendous success.”

Danielle Denk (danielle.denk@tpl.org) is the director of the Trust for Public Land Community Schoolyards Initiative.