“How many of you are parents or grandparents?” New NSBA President Frank Henderson Jr. asked at NSBA’s third general session on Monday. Most of the audience members raised their hands. “So you understand how the role of parent or grandparent and school board members are intrinsically linked,” he responded. “I’m sure many of the school board members here today began their service following a similar path.” 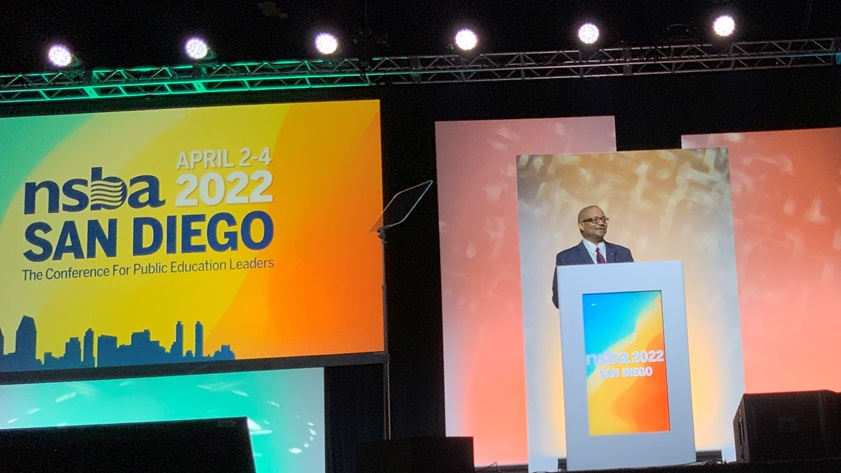 Like the audience members, Henderson’s road to school leadership started with his children. He volunteered at their elementary schools, joined the PTO, served as PTO president, then became a member of the district site council. From there, he ran for and earned a seat on the Seaman USD 345 Board of Education in Topeka, Kansas, in 2007. He was active in the leadership of the Kansas Association of School Boards, serving as president. Monday, Henderson continued his journey when he began his term as the 2022-23 president of the National School Boards Association.

“During those days as a parent-volunteer, I saw firsthand the powerful impact that every adult can have in a child’s life,” Henderson told attendees. “I know you have seen the same, and that’s a ‘why’ we can all share because we know every child matters. That’s why we serve.”

Henderson, who worked in state social services and in the criminal justice system for over 25 years, was appointed to Kansas Governor Laura Kelly’s Advisory Council on Education and also served as a commissioner on the Education Commission of the States.

During his conference remarks, Henderson highlighted some of the recent legislative victories that NSBA members have advocated for on behalf of students and public education—including $123 billion in federal funding for K-12 public schools in the American Rescue Plan, $3 billion for IDEA, and $7 billion to close the Homework Gap.

“That’s what happens when we’re united and focused on what’s best for our students. You all should be very proud,” he said over applause.

But Henderson also reiterated the message shared by NSBA Executive Director and CEO Dr. John Heim on Saturday that we need to keep getting better, working hard, and moving forward in the service of public school students.

NSBA conference attendees are here “because we know we can make a difference,” Henderson said. “It is our responsibility, in partnership with families, to ensure that each child is given the individualized, specialized, and tailored opportunity to succeed and reach their God-given potential. Regardless of conditions, needs, experiences, characteristics, and giftings, we take that combination, unique to each child, and work to bring about the best outcome for each and every student.”