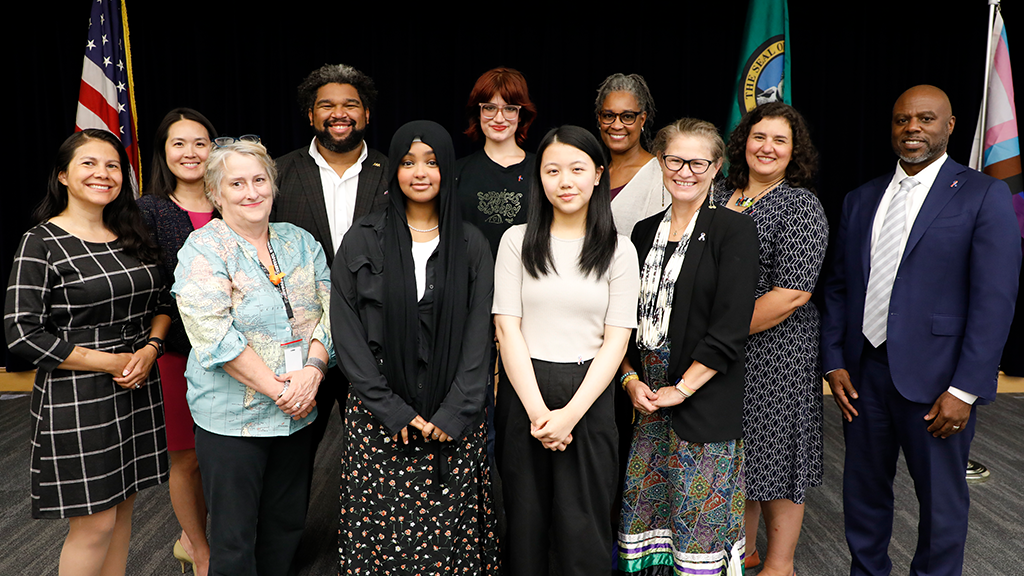 A decade after Washington’s Seattle Public Schools committed to ensuring educational and racial equity, the district continues to take bold, decisive steps toward its goal of being an anti-racist school system and raising student achievement for “students of color who are furthest from educational justice.”

A strategy emphasizing high-quality instruction and learning environments to change outcomes for African American boys and teens is outlined in Seattle Excellence, the district’s 2019-2024 strategic plan. Commitment to that strategy also is echoed in a new governance framework adopted by the board of directors in 2021.

Disaggregating these achievements shows that 78 percent of students of color furthest from educational justice completed advanced coursework in 2017-18, while that number grew to 89 percent in 2020-21. Focusing on culturally responsive environments led to a 4.3 percent decrease in discipline among this student group. Further, African American male students completing advanced coursework moved from 68 percent to 86 percent over the same three years. Disciplinary actions among these students were reduced from 8.4 percent to zero.

The district’s Seattle Promise Program, in partnership with the city of Seattle and Seattle Colleges, guarantees that graduates receive free tuition and access to any of the colleges’ three campuses. The overall number of district graduates enrolling in the colleges has more than tripled since 2018, 65 percent of whom are students of color and more than 30 percent of whom are first-generation college students. 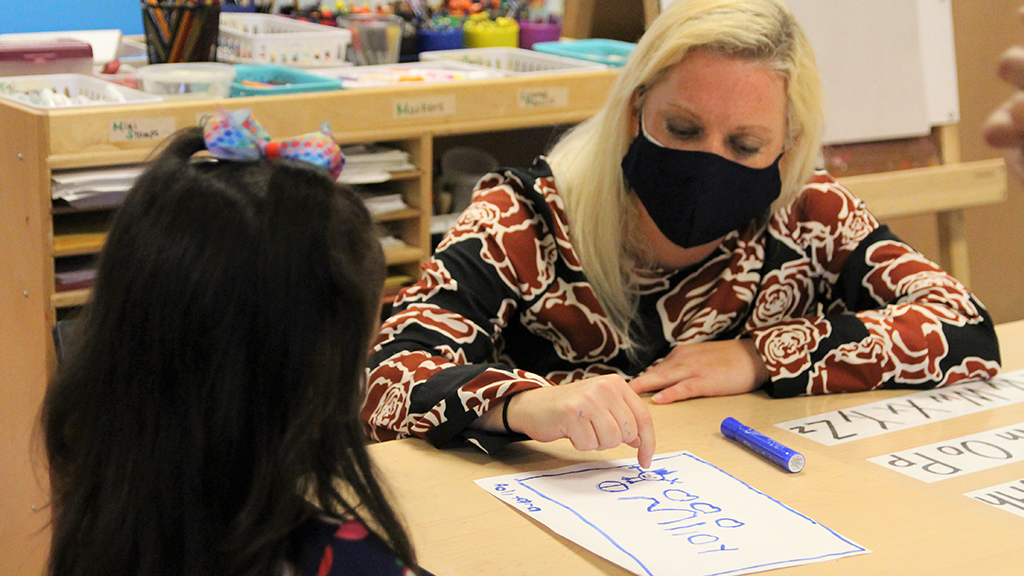 A PRE-KINDERGARTEN TEACHER WORKS ONE-ON-ONE WITH A STUDENT.

While expanding educational access to the youngest students via preschool, including Head Start and special needs programs, the district supported older students by establishing a Department of Liberatory Education. Nearly a dozen courses in American Indian Studies, Black Studies, Ethnic Studies, and LGBTQIA+ studies have been designed and launched to provide more inclusive learning.

And this year, the district welcomed three nonvoting student members to the Board of Directors. Student advocates lobbied for students of color to have a stronger voice in school policy decisions.

“They’re representing a broad constituency of students across the district,” says Seattle Superintendent Brent Jones. “If we’re not privy to their perspectives, we’re missing out on an opportunity.”

These efforts—and the strategic initiatives behind them—have earned the Seattle Public Schools the 2022 CUBE Annual Award for Urban School Board Excellence. The award, which recognizes distinction in school board governance, academic improvement, educational equity, and community engagement, will be presented in December at the CUBE 2022 Annual Conference in Miami.

“At CUBE, we pride ourselves on sharing best practices and showcasing excellence in urban school board governance in the form of real, tangible impact that centers student equity,” says Micah Ali, CUBE Steering Committee chair and president emeritus of California’s Compton Unified School District Board of Education.

“It is my honor to recognize Seattle Public Schools with the 2022 CUBE Award for Urban School Board Excellence. The district’s commitment to ensuring an anti-racist school system, and the actions it has taken to create policies and procedures sustaining that critical learning environment, demonstrates what school leaders can and must do to improve outcomes for students in urban districts,” Ali says.

“The district leadership team for Seattle Public Schools represents an outstanding example of the impact that school leaders can have in advancing access and educational equity,” says John Heim, NSBA’s executive director and CEO.

Improving the system to improve outcomes

The road forward has not been without obstacles, even in this engaged, inclusive-minded community where each school board meeting opens with an acknowledgment that the city is founded on “the ancestral lands and traditional territories of the Puget Sound Coast Salish People.”

Home to more than 50,000 students (30 percent of whom qualify for free or reduced meals), Seattle Public Schools weathered a teachers strike that delayed the start of the 2022-23 school year. Complicated contract negotiations over transportation services made daily news headlines. Pandemic-related learning disruptions continue to impact some of the most vulnerable students.

“All those things separately may point to a story of adversity, but really what we feel strongly is that it points to a story of new stability and re-found focus,” says Brandon Hersey, chair of Seattle’s seven-member elected school board. The district has been able to “navigate these things and still come out on the other side with a system that is very prepared to support our students and do what we need to do to ensure that we are getting the most beneficial outcomes for them.”

Jones notes that voters approved two levies (by almost 80 percent each) earlier this year to fund educational programs and operations, buildings, technology, and academics/athletics. “They believe in what we do,” he says. “Where we struggle, sometimes, is around the how.”

A desire for stability and focus helped drive the board’s implementation of the Student Outcomes Focused Governance (SOFG) framework. The governance model is particularly appealing to Seattle board directors because it redefines the priorities of the board and superintendent, while adhering to the community’s values of safe, anti-racist, high-quality learning environments, Hersey says. 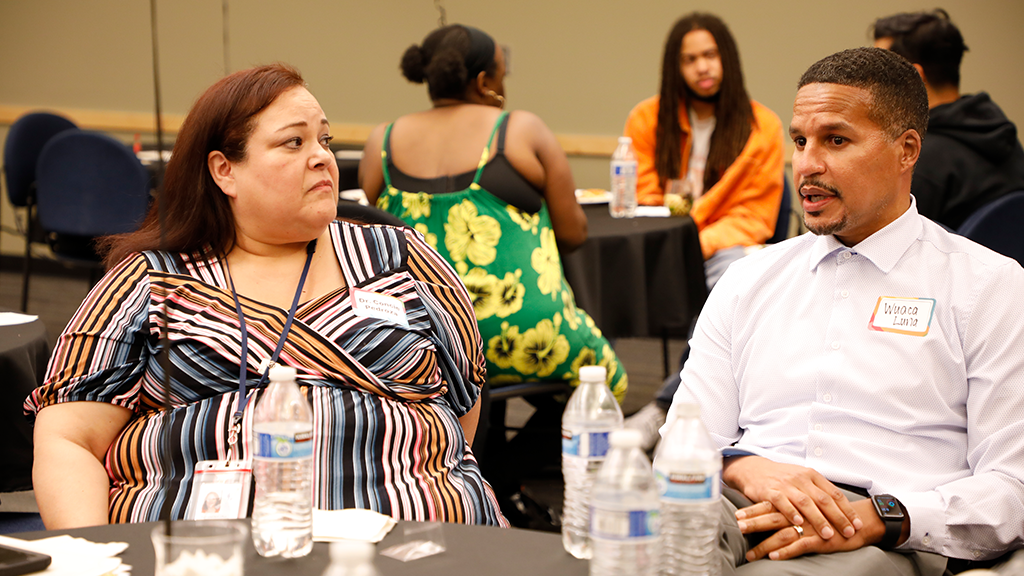 The SOFG approach emphasizes that the board gets out of the school district’s day-to-day operations and instead focuses on student outcomes and “what it is that our students know, and what it is that they’re able to do,” he explains. Board members can often “get pulled into various community problems, various classroom problems, various school-based problems. So much so that board directors get in the way and oftentimes really impede the system and don’t allow it to do what it does best.”

In addition, for boards to “lead in an educational context, we have to do so by example” and demonstrate open dialogue and discourse. This model emphasizes that objective, Hersey says.

Executing the governance model demands that boards be specific around their goals for the district, he adds. With that in mind, Seattle’s board members, superintendent, and staff identified three specific goals and five guardrails to focus on over the next two years that are aligned with the district’s strategic plan and the Targeted Universalism (TU) approach to action already in place in the strategic plan.

TU calls for the use of targeted and differentiated efforts to meet the needs of specific student populations so that every student can meet a universal goal. By focusing on students of color who are furthest away from educational justice and ensuring that they thrive in school, Seattle officials say that conditions will improve for all.

Jones likens it to a systems approach to continuous improvement. “You start where the system isn’t working the best and do a root cause analysis. If you can fix that, then by definition, the system works better, and everyone can benefit.”

He continues: “It’s not a binary situation where we fix these students and then we fix these other students. No, we’re fixing the system of adult practices and beliefs, and we shore up our operations. Then each one of our students should be a beneficiary of that improvement.”

Although not every racial or ethnic group is identified in every aspect of the strategic plan, Hersey stresses that “we 100 percent are treating their needs and outcomes with the same level of urgency and attention as we would for our Black, Latino and Latina students, and others that have been marginalized by the system.”

As the district dives into SOFG, the three academic goals identified by the Seattle leadership team focus on Black male students’ reading proficiency by third grade, meeting math standards by seventh grade, and ensuring that these students graduate college- and career-ready by taking at least one advanced academic course and have sufficient credits to graduate. 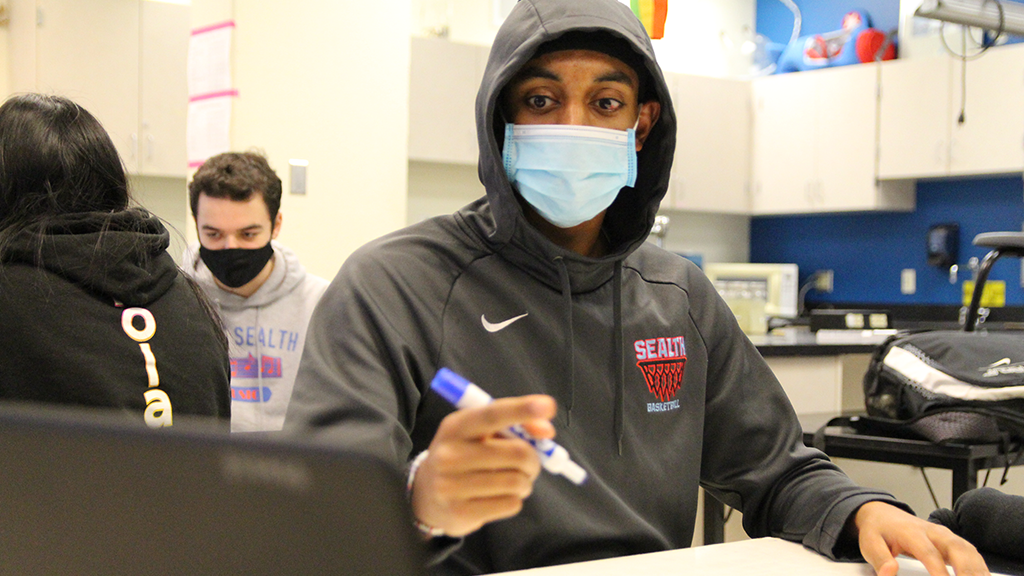 A HIGH SCHOOL STUDENT IN THE INTERNATIONAL BACCALAUREATE PROGRAM.

Among the seven guardrails: ensuring a welcoming environment in all district departments, school buildings, and classrooms; preventing the adoption of programming that does not prioritize educational and racial equity; and preventing the use of disciplinary actions as a substitute for culturally responsive behavioral and social-emotional supports for students.

“This is the first time in a long time that we’ve had this level of clarity and focus” regarding goals, Jones says. “We’ve had broad goals, but they haven’t been SMART goals in terms of specific, measurable, attainable, timely, and relevant.”

The guardrails are critical, he notes, because they establish the “conditions that we want to set forth in our schools and classrooms, so that these goals can take hold, so that we can have the outcomes that we’re looking for.”

The guardrails also function as a guide by which the superintendent is assessed. “We’ve had an innumerable amount of turnover with our educational leaders, most notably, the superintendent,” Hersey says. “A big part of that is that nobody is superhuman. Putting the guardrails in place as a part of Student Outcomes Focus Governance gives us some really clear level setting and a place to start ensuring that we’re holding ourselves accountable.”

It also gives the superintendent the latitude to take action to achieve those goals and an understanding of how he will be held accountable, Hersey adds.

Empathetic to the cause

Jones, who was selected as Seattle’s superintendent in March after serving as interim superintendent for 10 months, has a long personal and professional history with the district. Not only did he attend Seattle schools from kindergarten through 12th grade, but his mother was a Seattle Public Schools teacher. Today, Jones is the parent of a district student. 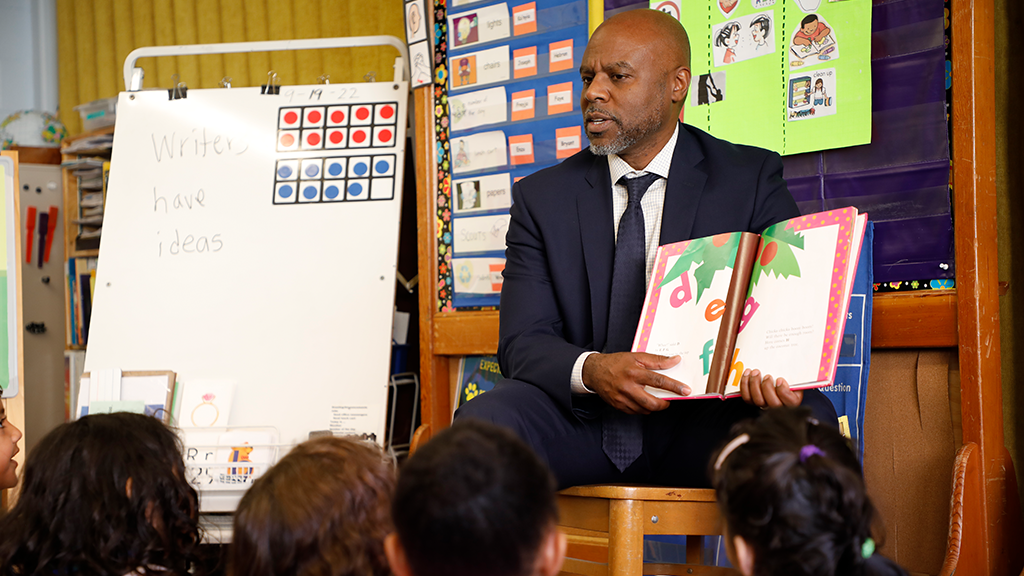 His professional career as a manager for educational institutions and government agencies also includes service as Seattle Public Schools’ chief equity, partnerships, and engagement officer. In that role, he developed the school system’s strategy for eliminating opportunity gaps and its road map for realizing racial equity for students and families.

Jones points to the critical importance of community engagement and support in the district’s equity work. He notes that the terminology “students of color furthest from educational justice,” now deeply entwined with the district’s mission, was originated by “trusted advocates in the community.”

The push to improve academic outcomes for Black male students in Seattle is something that he feels deeply. “I’m not just sympathetic to the cause, I’m empathetic to the cause because I’ve been in it at all the different levels,” he says. “I have a unique perspective, not unlike other people who work here.”

“It’s a pleasure” for Seattle Public Schools to be recognized with the CUBE award, he adds. “We’re so deep in the grind, and sometimes, when we’re being introspective, it’s nice to be extrospective around how we’re positioned relative to our peer districts. We’re just glad that we’re able to represent something that maybe advances our collective cause.”