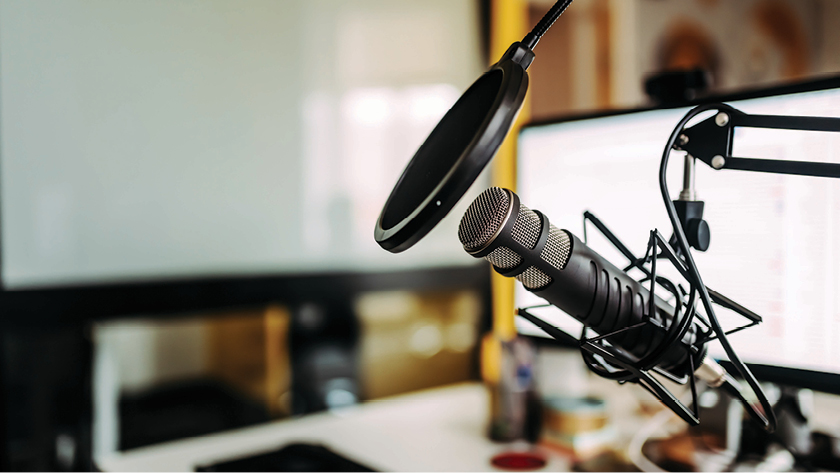 Chances are, you listen to at least one podcast regularly. We use this audio format to be entertained and informed. As of 2021, four out of 10 Americans ages 12 or older had listened to a podcast in the past month, according to a recent report by Edison Research and Triton Digital.

Districts and schools increasingly are using this popular audio format to reach parents and other community members. Podcasts have relatively low production costs compared with other media. They can be downloaded easily, and people can listen while driving, exercising, or doing other tasks.

Some schools are showing students how to produce their own podcasts. Podcasts can be a powerful way to give students opportunities to voice their ideas and viewpoints while connecting to the outside community. They also receive hands-on experience with new media.

Here’s a look at several podcasting initiatives from districts and schools across the U.S.

‘CAN WE TALK ABOUT THIS’
When Melissa Guerette and her fifth-graders at Maine’s Oxford Elementary School heard that a different school had cancelled an author visit with Kate Messner over her portrayal of opioid addiction and substance abuse in the novel The Seventh Wish, it sparked a candid conversation with her students. They’d connected with the book and wondered “why adults would deem it to be too hard to talk about or too big for them to talk about,” Guerette says.

Later, as she prepared to present at the National Council of Teachers of English conference with a panel of authors, Guerette asked some of the previous year’s students to talk to her about the classroom discussions they’d had around difficult topics in books. “It became clear, not only how they appreciated the conversations we had, but they were missing it from their sixth-grade experience,” she says.

Those discussions evolved into Guerette leading those students in a podcast club and the creation of a podcast called “Can We Talk About This.” She says, “it became both a way for me to continue to nurture students in developing empathy and understanding about the world around them and also to fill this need students were looking for.”

The pandemic paused the podcast, and the original members are now in high school. Before then, they produced three episodes, each focusing on a different middle-grade book chosen by the students. They all agreed to read the book and outlined a script using Google Docs. For instance, one student read an excerpt, while others might give a synopsis or start the conversation. Guerette helped the students get comfortable with a loose script rather than reading it verbatim because that made the conversation flow more naturally.

Guerette learned more about podcasting at Nerd Camp, a free summer literacy conference held in Parma, Michigan. She edited the audio in GarageBand and uploaded it to the podcasting platform Anchor She also shared it on social media, and a fourth-grade teacher at the school played it for students.

Podcasts, she says, are a valuable way to “amplify the important things that kids have to say and the way that kids can teach any of us, regardless of what age we are.”

Sophomores brainstorm topics and produce a podcast episode. Building on that audio experience, juniors do video production, although this plan had to be adjusted during the pandemic.

Before the big podcast project, which takes about three weeks of dedicated class time, sophomores spend six months learning about writing, interviewing, and audio design. “We took baby steps to give students enough practice in those fields so that when it came time to do the big podcast, they had practiced all the component parts,” Weintraub says.

Weintraub has found that podcasting provides opportunities to discuss rhetorical devices and argumentative strategies with his students. “It does make teaching writing more vibrant, more immediate, and more relevant,” he adds.

A citywide grant funded the purchase of microphones, audio recorders, and other equipment. All students in the district have access to Chromebooks, and some have Macs equipped with GarageBand. Some students have access to more sophisticated Adobe software if they become interested in audio design. However, Weintraub says, it’s possible to produce a podcast using just a smartphone and free software like Audacity.

Several of Weintraub’s student teams have submitted to NPR’s Student Podcast Challenge. The class found out about it after starting the project a few years ago. Weintraub quickly realized it was a good opportunity to have student work assessed outside the classroom. One team’s podcast about social media and eating disorders was named a 2021 high school finalist. Several other teams have received honorable mentions.

Weintraub says contests like NPR’s give students real-life feedback rather than just getting a grade from their teacher. He encourages other teachers to make student podcasts public if they can. “If you’re creative, you can put that work on display in a way that is much more exciting than your standard or history homework,” he says. “When you make it public, it has the effect of raising the expectations and raising the bar for student work.” 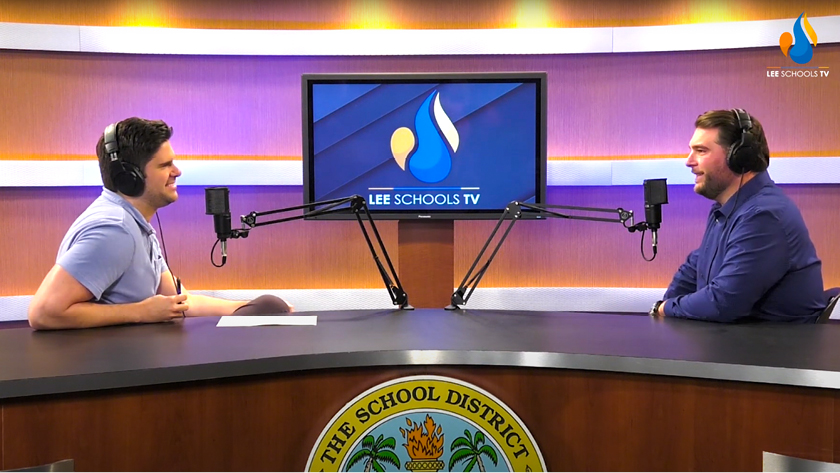 Because of their popularity among adults, podcasts can be a valuable communications tool to reach community audiences and engage community members. Florida’s Lee County Public Schools started a podcast series in 2018. Each 25- to 45-minute episode features an in-depth interview with a teacher, administrator, graduate, or other notable person affiliated with the district.

As of this writing, the district has released 47 episodes so far, available in both audio and video formats. Guests have included a recent graduate who now works as a professional singer, a family and community engagement specialist, and a high school cybersecurity teacher. The podcast paused during the pandemic, but it resumed in August 2021 with host Rob Spicker, assistant director of communications, interviewing Interim Superintendent Ken Savage about service-minded leadership.

Jason Sill, the district’s former coordinator of multimedia communications, says the district’s podcast “was another platform for us to be more transparent with our community, allow some of our staff to put a face to the name, and let them talk more in-depth on particular topics. One of our goals is to meet our public where they are, and that’s why we have a YouTube channel and Facebook and podcasts.”

The podcast is filmed in the district’s television studio, switching between three cameras: one for the host, one for the guest, and a wide shot.

“We really try to make it something that you would see on regular television,” says Sill. Editing would be much easier in an audio-only format, but they’ve chosen to make it available in both formats in the hopes of reaching a wider audience.

Sill’s department found inexpensive ways to promote the podcast through the district’s internal newsletter. This allows them to use the podcast not only for external communications but also to keep employees in the loop.

Although the podcast initially didn’t perform as well as some of the district’s other social media content, Sill says it’s gaining traction. Podcast viewers or listeners tend to spend more time consuming content than someone simply scrolling through social media. “The audience that’s going to listen to podcasts is willing to be a little more engaged, so you’re reaching probably different audiences than you would with some of the other social media,” he says.

PODCASTING TIPS FROM A PRO
Before becoming head of podcasts at A Kids Company About, Matthew C. Winner worked as an elementary school librarian and hosted the popular “Children’s Book Podcast.” As part of a podcast club rotation, he had third- and fourth-graders take over the podcast and interview picture book authors. The experience helped those students develop critical reading and inquiry skills as well as teamwork, he adds.

Here are some tips from Winner on guiding student-produced podcasts.

To encourage student podcasters, NPR’s Student Podcast Challenge is open to students in fifth through 12th grades. The winning submissions are featured in segments on the shows “All Things Considered” or “Morning Edition.” NPR also developed free online curriculum guides to podcasting for educators and students, available at www.npr.org/2018/10/30/662070097/starting-your-podcast-a-guide-for-students.