Sitting around a conference table adjacent to the principal’s office, nine juniors and seniors from a rural South Carolina county are talking about their dreams, aspirations, and the realities of navigating high school during a pandemic.
They talk about the stress of returning to class in person, the challenges of working at home virtually, the uncertainty caused by “not knowing what’s coming next.” They talk about the cliques in their school and how difficult it is to get classmates and teachers more engaged.
“There have been a lot of disconnects,” says Loudon Boulware, a senior at Fairfield Central High School in Winnsboro, South Carolina. “But now that everyone is bringing all of this to light, we know that we can make a big difference.”
Boulware and his classmates at this 775-student school, located about 30 miles north of Columbia, participated in a student voice project in the spring of 2021. The project, which is continuing and expanding this year, brought students, school district, and community leaders together to discuss youth mental health, school funding, and economic opportunities in the region.
Districts have taken a variety of approaches to keep students engaged, such as appointing representatives to the school board and surveys to get their perspectives on teaching and learning. A 2019 report from the Center for American Progress notes that “students have the greatest stake in their education but little to no say in how it is delivered. This lack of agency represents a lost opportunity to accelerate learning and prepare students for a world in which taking initiative and learning new skills are increasingly paramount to success.”
Giving students opportunities to share their perspectives and make their voices heard is increasingly important as districts navigate the tendrils of a pandemic that has increasingly put youth at risk—especially those in high-need areas such as Fairfield County, where almost 90 percent of students live in poverty.
“If you are working to create a more inclusive curriculum that prepares young people to be critical thinkers, problem solvers, and initiators of their own learning, you have to listen and learn from them as well,” says Barnett Barry, senior research fellow for the Learning Policy Institute and founding director of Accelerator for Learning and Leadership for South Carolina (ALL4SC).
PARTNERSHIPS
In the fall of 2019, Barry returned to the University of South Carolina to start ALL4SC, which he describes as an “outreach project” that supports “high-need school communities in partnership with parents, students, teachers, faith leaders, and business owners.” The plan, he says, is to build a system of “whole child and cradle-to-career education.”
Barry found a willing partner in Fairfield County Superintendent J.R. Green, who was intrigued by the prospect of a “research institution working with a school district to change the trajectory of young people in a rural community.” Even though most of its students are from low-income households, Green notes that Fairfield County’s schools have “relatively substantial means” thanks to the Dominion Energy nuclear facility, which provides the district with almost 60 percent of its local tax revenue.
“Our district is an anomaly,” says Green, now in his 10th year as superintendent. “We have a state-of-the-art career center, orchestra, dance, the culinary arts. People who come and visit our schools leave very surprised because we don’t look like a traditional high-poverty community.”
But, as Green notes, top-notch facilities and programs will get you nowhere unless students, families, and community leaders are engaged and working toward the same goal. And that has been a recurring issue in Fairfield, where only one-third of the district’s 2,930 students are proficient in reading, and 36 percent meet the standard in math. Both numbers are well below the state average.
“It is the collective responsibility of everyone to change the trajectory, not just of young people, but the entire community here,” Green says. “If you ask the average person here whose responsibility it is to maximize the potential of young people, folks here will say it’s the parents and the schools, but outside the parents and the schools, no one has a role. We’ve got to challenge that way of thinking.”

Barry and Green agreed to develop a broad plan that eventually will focus on whole-child education and community schooling, but first, they wanted to hear from students.

“Many of our students felt like unengaged, unempowered bystanders in their education, and that what they had to say would not affect the trajectory of what happened in this community,” Green says. “They thought it was up to the adults to figure out how to change the dynamics because they didn’t feel like they had the voice or the ability to do anything about it.”
STUDENT VOICE
Merrit Jones grew up in Lexington County, which borders Columbia and has five school districts. Her mother served one term on a school board, so she knew the struggles districts faced over funding. At the time, South Carolina was near the end of a 24-year lawsuit on how it funded rural and poor districts.
“I was in a Title 1 school, and then I switched districts in the same county and saw the funding disparities that existed,” Jones says. “The funding lawsuit made me question lots of things, so I started asking questions. Fortunately, I was in a school that gave me the flexibility to ask those types of questions.”
In 2015, Jones became active in Student Voice, a nonprofit organization that works in all 50 states to advocate for youth-driven solutions to education inequities. The organization, which started in 2012 as weekly Twitter chats with the hashtag #StuVoice, now has a $300,000 budget and is run by a team of 15 high school and college students.
“After graduation, I took a year off to hear students tell their stories,” says Jones, who became Student Voice’s executive director and now works as an adviser for the organization. “When you ask young people to think critically about their school experiences, you will find they have some powerful things to say that you may not have thought about.”
Jones, who graduated from the University of North Carolina at Chapel Hill in 2021 and now is helping Barry at All4SC, has worked with school board associations in several states on ways to engage students better. She points to surveys showing the lack of engagement among many students, which can impede their opportunities for success after high school.
“Right now, you have an opportunity to capture some unique information because your current staff and students have the lived experience of teaching and learning in a pandemic,” she says. “We all have some type of school experience, but if you’re not in the classroom now, you don’t know what it is like to teach and work in these conditions. It’s so important to start this intergenerational dialogue so that young people feel heard and valued and respected.” 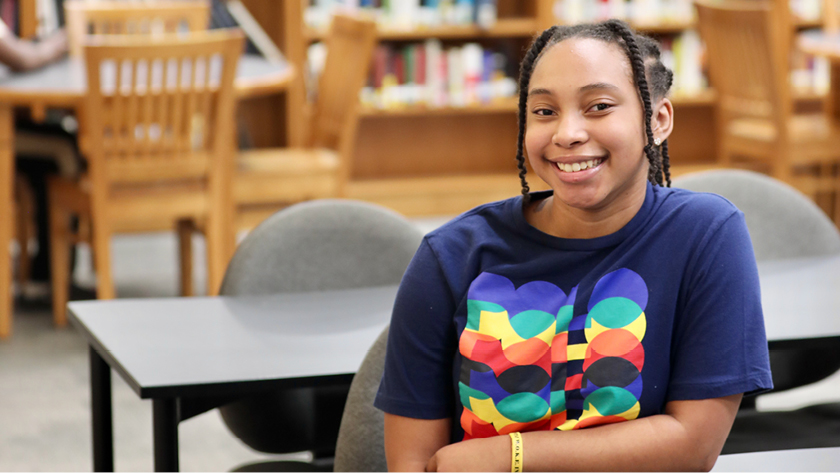