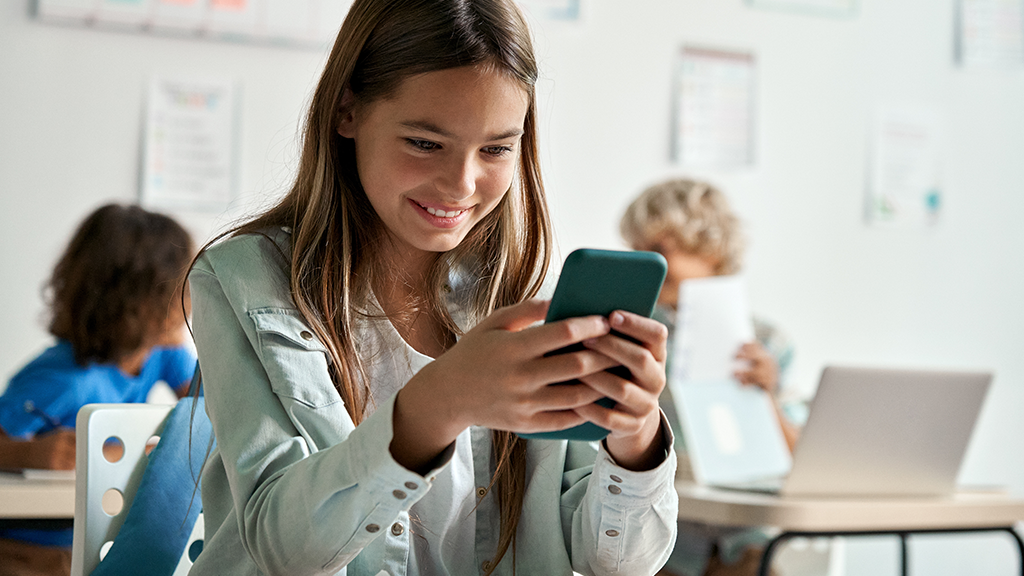 As pandemic restrictions eased and students returned to classrooms this year, more than the threat of the virus loomed over their academic success.

After having unobstructed access to cellphones during virtual learning, students were distracted by the devices more than ever, some schools report. Now, educators are tasked with finding a way to cut down on cellphone usage during class.

Most attribute the increase in distractions to students’ reliance on the devices for connection to friends and family during previous social isolation. Some students used phones to access class materials in schools without one-to-one technology programs, blurring the distinction between phone time and focused learning time.

A 2019 survey by SlickText, a text messaging marketing company, found that about 76 percent of educators found cellphones to be a distraction in the classroom. Almost 50 percent of parents surveyed, on the other hand, were looking for teachers to incorporate cellphones more into their curriculum. Finding a policy that appeases all stakeholders can prove challenging.

Ultimately school leaders emphasize the need to communicate expectations around cellphones—whether used educationally or socially—clearly and broadly to students, parents, and teachers. This communication, they say, will foster good digital citizenship in students while minimizing tech distractions in the classroom.

Increase in problems since the pandemic

Dealing with phone distractions was challenging during virtual learning, but even harder once students returned to class in person, says Elizabeth Noto, principal of Herndon High School in Fairfax County, Virginia.

“It was because they weren’t connecting the way they used to” before the pandemic, she says. “We were struggling to get them to engage in class.”

Teachers reported looking out at their classrooms and seeing students gazing at phones in their laps. Noto says the school set out to help students connect to the classroom by limiting the tech distraction. Starting in the fourth quarter of last school year, Herndon began requiring students to have their phones off and away during class, allowing them on only in the hallways between classes and during lunch.

The Fairfax County School Board followed suit in June, voting to approve a change to the district’s Student Rights and Responsibilities document that would require elementary and middle school students to put their phones away for the day and high school students to not use the devices during instructional periods. The changes in the 180,000-student district, the largest school system in the state, take effect this school year.

A nationwide study by Common Sense, a nonprofit that provides media recommendations for families and schools, found an increase in phone ownership across all age groups between 2015 and 2021. In 2021, 43 percent of 8- to 12-year-olds owned their own phone, as did 88 percent of 13- to 18-year-olds.

Fairfax School Board Chair Stella Pekarsky says technology use increased as a natural consequence of the pandemic, with online learning requirments and a desire for social interactions with peers.

But when students returned to school, surrounded again by peers and teaching in real time, their heightened usage of cellphones remained.

“The agreement amongst most people, and I think the kids themselves a lot of times, is that cellphones and technology have become a distraction to them. The ‘how we fix it’ is where we all need to focus on and assess and reassess as we implement these different policies and approaches,” she says.

Bobby Thomas, director of high schools for Denver Public Schools, served as principal of Denver South High School during the height of the COVID-19 crisis. He says the pandemic exposed inequities in students’ access to technology, which was crucial in a virtual learning environment.

In an attempt to reduce these inequities, his school allowed students to use their cellphones for schoolwork during remote or blended learning.

However, the inequities persisted. Thomas notes that it became clear that students working on their phones were still at a disadvantage to those doing work from a laptop.

Thomas says his school also expected a challenge in managing phone usage with the return of in-person learning since students could be on their phones—whether for academic purposes or recreation—whenever they pleased while learning from home.

But cellphones are not the only devices that have proved distracting in the classroom.

Mackenzie Smith, a teacher at Arts Academy at Summit, a public K-6 school in Canton, Ohio, says that before the pandemic, her school did not have a one-to-one technology program for students. Instead, teachers relied on laptop carts and shared resources. During the pandemic, students got access to iPads for virtual learning.

Once it was safe to return to the classroom, Smith’s school gave students the option to remain under virtual instruction or adopt a hybrid schedule. But even as students returned in person, iPads remained part of learning.

Smith noticed that once students had the tablet with all of their materials in front of them, there was less need to be engaged with her as a teacher physically in the classroom.

And students often strayed from the iPad’s intended educational purposes. While the tablets’ functionalities were restricted by the district’s technology department, students found workarounds and accessed websites like YouTube. They also took up emailing each other, and sometimes, their teacher during class.

“I would get sometimes get emails from students who are sitting in my classroom in front of me. They could have just raised their hand but chose not to,” Smith says.

Even though technology has become heavily integrated into classroom instruction, even since the return of in-person instruction, Smith says she has had to implement times where students are required to put the screens down.

“If your iPad is open, students are—their eyeballs are on the iPad—and they maybe have half an ear listening to the teacher,” Smith says.

Managing the iPads and resulting distractions meant she focused less on fighting students’ phone usage, saying she couldn’t contend with both devices at the same time.

Smith estimates that 75 percent of sixth graders at her school have cellphones, with that number increasing to 95 percent of eighth graders.

Recently, Smith advocated for her school to create a cellphone policy to be communicated to teachers, parents, and students. The resulting policy, sent in a letter to parents and guardians in 2021, includes a three-strike system for students who used their phones inappropriately.

They would be asked to put it away on strike one. Strike two means the teacher confiscates the device, and on strike three the principal gets the phone—with the student’s parent asked to pick it up at the end of the day.

In Denver, Thomas says students are more addicted to their phones now than he’s seen in over 20 years working in education. In the 2018-19 school year, his school piloted a program meant to decrease cellphone distractions. They used Yondr pouches, a device that locked phones away and could be unlocked using a magnetic tool, allowing students access to their devices at appropriate times.

Thomas said not all teachers bought into the use of the pouches, as they required a degree of consistency and structure to lock and unlock around instructional periods. There also was a good deal of pushback from parents.

In Fairfax County, the school board was divided over the new cellphone rules, approving the new policy in an 8-4 vote. A few schools in the district piloted these expectations before the vote and saw success in students’ ability to engage with each other, improved time on tasks, and attention, Pekarsky says.

The school board received feedback from the superintendent, who recommended that formal cellphone restrictions be implemented.

“I think you have everybody agreeing on the goal, some people very excited, and some people really wondering, ‘what is this actually going to look like?’”

In the wake of Uvalde

While schools across the country work to find solutions to cellphone distractions, they also grapple with concerns about safety in classrooms. These concerns were heightened after the May 24 shooting at Robb Elementary School in Uvalde, Texas, that left 19 students and two teachers dead.

Pekarsky says safety concerns came up in considering Fairfax’s new cellphone expectations. Parents had become accustomed to immediate access to their students and would want the same in an emergency like a school shooting. “We don’t want to think the worst-case scenario, but it’s hard not to worry about that just in the context of what we’re seeing around us,” she says.

Raegan Bartlo is a parent of a middle and a high school student in Fairfax County. She says her middle-schooler’s phone alerts her of when she makes it to and from school. Otherwise, her middle-schooler follows the “away for the day” policy—where her cellphone must stay in her locker during the school day.

While Bartlo is concerned for her kids’ safety, like any other parent, she feels OK with her middle school student not having her phone during the day. She attributes this comfort to the school’s excellent communication, which keeps her well-informed.

She also says that students using their phones in the event of emergency could cause confusion if they try to take a directive from someone other than the adult in the room. “If we as parents start calling our kids and distracting them away from that, it could cause more chaos and put them in more danger,” she says.

Some students are invested in practicing control around their phones. In fact, Margaret Barnes, principal of Fairfax County Public Schools’ Holmes Middle School, says she had a small group of students who would turn in their phones at the beginning of the school day to the office and pick them up at the end of the day without a fight.

“A few of those students expressed that it made it easier for them to focus. They thanked us for insisting on that,” Barnes says.

Cellphones are pervasive in society—used for entertainment and social connection, but also for practical things like paying bills. Barnes points out the importance of not just restricting phones, but also teaching students how to use phones effectively.

“We can’t ignore that the cellphone is a tool that we also use to manage ourselves,” Barnes says.

While phone usage and distractions in class vary by district, school, and even classroom, school leaders stress the need for clear expectations around phone policies for all school members. This means communicating when using a cellphone is appropriate to teachers, parents, and students alike.

Noto said it’s important that her district’s school board turned to their schools and listened to accounts of the problem at hand to create a solution. With that engagement, she expects that the results will be powerful.